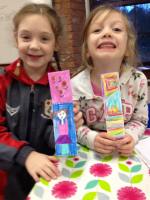 The WRITE STUFF Kids Club has its home in Muff, Co. Donegal. However it also has bases in Buncrana, Letterkenny, Greencastle and Derry. Workshops are held in all areas to encourage children to down screens and delve into their imagination, create stories, tell stories, read books and talk booky things. Its a hive of imagination and creativity for children aged 5 to 15. Over the past week, children at the workshops have all been celebrating World Book Day 2017. Booky bookmarks were made, new book covers were created and numerous stories were written about how the children would feel when they met their favourite book character. Check out The WRITE STUFF Kids Club facebook page where you will find a selection of videos where the children read their stories. They really are amazing. 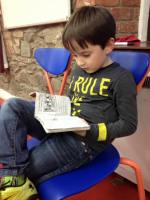 Another exercise we did at two venues was group story writing. One child started the story and then passed it to the next. At our Muff group last Saturday a group of four young ladies (aged 7-9) did the following story (you can see/hear them reading it over on the fb page).

Once upon a time there lived two children. They loved to read books. Every day the read lots of books. Their favourite book was The Famous Five. One day they went for a walk and met Anne.
Anne said, “do you have any ice-cream?”
They didn’t have any ice-cream so Anne went upstairs to her bedroom. On her way there, she saw a box of marshmallows. She took five of them. Then she heard someone coming so she ran all the way up to her room. But they caught her. 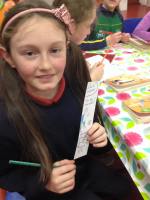 “What are ou at Anne?” they said. “You were told not to eat those marshmallows because we’re almost out and the shops are closed.” “I’m sorry” said Anne, “they were just so tempting.” Anne started to cry. “Don’t cry Anne they said.”
The end

Earlier today at Tullyarvan Mill in Buncrana our senior group of approximately 12 children wrote the following story. These kids were aged 7-11.
One day there was a talking dog. He never ever stopped talking. I said ‘stop’ but he just kept talking. I went to get help.
“What is it?” the Vet asked, as I burst through the double doors. My face was scarlet and I was panting.
The Vet asked what was wrong? I said the dog was talking. The Vet said that’s impossible. A dog cannot talk.
“But it’s true” I said, and then I brought the dog in to see him. The dog started talking and talking and talking. Eventually the doctor shouted ‘STOP!’ The dog stopped but he never stopped for me. This doctor is magic. 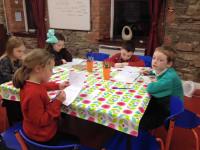 The dog stayed like this all day. Then I tok him home but then when I get home he started to talk and talk but then he stopped.
I was shocked after all that time. He finally stopped and I nearly fainted.
And that was the story of the talking dog.
The End.

World Book Day is all about encouraging people of all ages to read. It highlights the importance of books in our lives. Over the past week I have encountered numerous children of all ages with a passion for books. They have amazing imaginations and it’s all thanks to the books they read. If it’s one gift you give your children, make it the gift of books and reading.