Skip to content
Are you aged 14-21?  Interested in acting, singing and dancing?  The North West’s premier arts venue is looking for you!
The Millennium Forum will be holding open auditions on Thursday 9th and Wednesday 15thMarch 2017 4pm-8pm for its youth production of the hit musical, West Side Story which will run at the theatre for three nights from 26th to 29th July. A host of leading roles are up for grabs including Maria and Tony as well as numerous Ensemble roles.
David McLaughlin, Chief Executive of the Millennium Forum and Producer of West Side Storyencourages everyone with an interest in performing to audition: 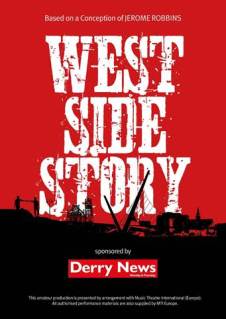 “In keeping with our commitment to developing local talent, we are looking for young performers to fill a range of male and female roles.  Anyone with an interest in acting, singing and dancing is encouraged to audition.  Who knows – it could be the start of a promising career in the theatre for some local performers, as many of our previous Youth Musical cast have already gone on to pursue their dreams in performing arts.  Dennis Grindle, who played Tony in our first production of West Side Story, went on to star as the first Jimmy Rabbett in the West End production of The Commitments.
Rachel O’Connor, who played our Sandy in Grease in 2013, went on to the finals of the hit television show, The Voice UK, which led to her landing a role in Michael Flatley’s new show, Dangerous Games, in the West End.  Her Grease co-star, Dylan Reid, who played Danny, has just finished a hugely successful run in the hit musical, Once, which went on to tour Korea. Dylan has also recently been seen on the UK television show, Let It Shine, auditioning for a part in the new Gary Barlow musical. Many people will also remember Mairead Carlin from our first production of Les Miserables, who has now achieved global success with the hit show, Celtic Woman.”
Daryl Moore, Education & Outreach Officer added:
“We are calling on male and female 14 – 21 year olds who can act, dance and sing. We hope to find both new people who want to join us and also young people who have auditioned previously. At the audition you will be required to sing (a song that’s not from West Side Story) and deliver a short two minute contemporary monologue.  If you do get a recall, it is vital that you can commit to rehearsals from June right through to the public performances in July.”
Those who make the final cast will become part of an unforgettable project performing West Side Story on the Forum’s stage for three nights, 26th to 29th July.
Based on a concept by Jerome Robbins and originally produced on Broadway by Robert E Grifith and Harold S Prince, by arrangement with Roger L Stevens, this classic musical is brought vividly to life by the Millennium Forum Youth Musical Theatre Group.
If you are aged 14 – 21 and believe you have what it takes to be onstage in this new production ofWest Side Story, make your way to the Forum for the open auditions.
The auditions will take place at the Millennium Forum on Thursday 9th and Wednesday 15thMarch 2017 4pm-8pm Following intensive rehearsals, West Side Story will be staged at the Millennium Forum from Wed 26th to Sat 29th July 2017.
This 2017 amateur production of West Side Story is presented by arrangement with Music Scope UK. This project is supported by the Arts Council of Northern Ireland and proudly sponsored by Derry News.
GMcC