The Bare Bodkin Theatre Co. presented The Great Hunger tonight at The Playhouse in Derry. Peter Duffy brought one of Patrick Kavanagh’s finest works to life on the Derry stage. Duffy not only recited this epic poem, he enacted the peasants experience throughout.

Referred to by many critics as Kavanagh’s ‘finest work’, The Great Hunger was written in 1942 and is a long narrative poem. The poem tells the story of Patrick Maguire, a peasant who, in the cautious way of many Irish peasants after the devastating famines of the mid-nineteenth century, postpones marriage and children while improving his small farm and increases his meagre wealth. Gradually Maguire realises that his own virtuous self-denial – his industriousness, devotion to an aging mother, and adherence to the moral teachings of the Catholic church – have led him to emotional desolation. Too old and too tied to his land, he will remain unmarried and isolated, a common fate in the Ireland of Kavanagh’s day. In the poem, Kavanagh’s lyrical evocations of the beauty of the countryside merely heighten the sense of Maguire’s sorrow. There is an excellent mixture of poetic voices and rhythms in this work.
Duffy did the work tremendous justice tonight on stage in Derry. He brought it alive and showed just what a literary legacy Patrick Kavanagh has left the world.
Peter Duffy grew up in rural Monaghan near where Patrick Kavanagh was born. He grew up on a small Monaghan farm and so has a ready affinity for Kavanagh’s material which informs and shines through his absorbing interpretation of the work.
His father knew Patrick Kavanagh and Duffy took time after his performance to share his knowledge of Kavanagh with us, the audience. He explained that the character of Maguire was a compilation of the Parish Priest, Canon Maguire, where Kavanagh lived, and the poet’s own dislike of his own name, Paddy! Cannon Maguire was a very educated man whom Kavanagh respected and felt he could relate to. Kavanagh has a grave dislike to his name Paddy and incorporated this into his epic poem. Maguire is a fictitious  character but is drawn from these two components. 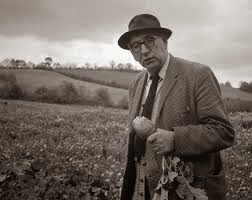 The Great Hunger shows compassion, spirituality, grave difficulties and yet many comic moments. At moments tonight we, the audience, were sympathetic, angry and at others laughing out loud. Such was Duffy’s performance.
Duffy explained another element to Kavanagh’s ‘otherness’ and feelings of being on the ‘outside’. He told the story of how Kavanagh’s father was born and the effect this had on the poets life and emotions. He made Kavanagh a very real presence in Derry tonight!
An epic poem was performed at it’s best.