The Jewel Box Festival sums itself up as ‘a collection of the brightest musicians, singers, artists, writers and chefs on the spectacular coastline of Inishowen, Donegal.’ For all of us Donegal folk, this is a real delight and something to really look forward to in just over one weeks time.
This festival will take place at Carnagarve mansion house, Moville,which has been derelict for years on Saturday July 16th.

The festival is being organised by Sarah McGuinness/Townsend (Derry born), a veteran of the music scene, theatre production, documentary film-making and comedy club promotion.
Sarah Townsend was nominated for an Emmy Award for her 2009 documentary Believe: The Eddie Izzard Story – an unfolding film about her then partner.
The Irish News recently said that “The Derry-born woman’s current film Noma: Forgiving Apartheid follows Noma Dumezweni, the Royal Shakespeare Company actress and recently confirmed Harry Potter star, as she makes an emotional return to the South Africa she fled as a child and meets her father for the first time. Having won favourable reviews at film festivals last year, it’s due for a wider release in newly extended form next year.”

Now later this month McGuinness is taking on a whole new challenge: promoting a boutique festival in her now hometown of Moville, here in Inishowen, Co Donegal. This is scheduled to take place on July 16 and will  incorporate art, literature, comedy and gourmet food. 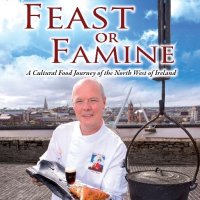 Inishowen is a prime spot for a festival such as this and McGuinness has the potential to turn this into an annual festival and one which might even compete with such as ‘Glastonbury’. She recently told the Irish News “Ultimately, I would like to see Jewel Box become the new Glastonbury.” How wonderful would it be to have our very own Glastonbury right here in Inishowen?
Jewel Box will also feature art exhibitions by McGuinness’s sister Jane Townsend and aunt Sheila McClean, while McGuinness herself will also perform songs from her forthcoming new album So Many Fires,.
2016 is set to be the inaugural Jewel Box event but it has the potential to grow and showcase all that this area has to offer in the line of culture. This area really is a hive of cultural activity and Jewel Box will only serve to heighten this.
The Jewel Box festival will be staged on Saturday 16th July at Carnagarve House Moville and tickets alongside further detail are availble at www.jewelboxfest.com.There are only 300 available, don’t miss out on your chance to part of this event. It really shall be the start of something huge to come.
GMcC