Ellen Hasson kindly took some time out this morning before taking to the stage, and the skies, at 11am, for a quick chat about this years Pantomime. With only one show today, it really is a little bit of a break for this lady and her cast.
Ellen is of course playing the iconic Peter Pan in this years panto at Millennium Forum. She tells me, “I’m loving it and having a really good time. This is my first time having the lead role and it’s just such a great part to play.”
Having lived in London for some time, Ellen is now back in her home town of Derry since earlier this year and teaching Dance and Musical Theatre. She says she’s loving being back home. “I’m glad to be back in Derry.” And playing such a great role in the panto, we’re glad she’s back in Derry too!!

The Derry panto is such a huge part of Christmas here in the North West. Personally I don’t think Christmas would be Christmas without the panto. Why is it still so popular I asked Ellen? “It’s just such a traditional thing. It suits everyone and it’s for the whole family. It’s funny and it has serious issues. And it’s something the whole audience can become involved in.” And become involved the Derry audience certainly does. Whether you’re booing the dastardly Captain Hook and laughing along with (not at) Smee, we all take part from beginning to end.
An avid fan of Peter Pan and its’ timelessness, and of course to never growing up, I wanted to know if Ellen felt the same, or is it just a job? She says, “No one really ever grows up.” Thank heavens for that, because as I’m fast approaching the big 50 myself, I can’t ever imagine having a heart other than that of a child (if only my joints etc would follow suit!!).
Ellen says that Peter Pan “is truly magical.” 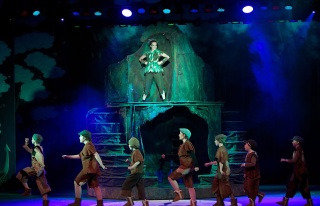 Having seen the show last Thursday night, I was of course transported to the magical land of Neverland, but the part which totally blew me away was the flying. Part of me actually believed these folk, and Peter Pan especially, were in fact flying across the skies. It’s done so spectacularly. So how does it feel actually being up there, in the Millennium Forum sky?  “I love it,” Ellen says. “I’ve never done the flying before and the harness does feel a little uncomfortable. But once the curtain goes up, you don’t notice it. It’s magical.”
Everything about this pantomime is magical. The story, the characters, the opportunity for us all to get lost in our imagination. And knowing the cast feel the magic whilst being part of it, really does make it even more poignant. If this were just a job, I 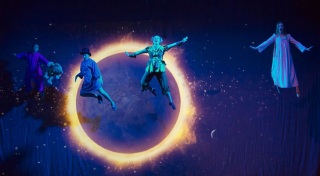 really don’t think it would be so entertaining. Everyone in this show is having a ball. That’s clear to see. Ellen did say she’s looking forward to a wee break over Christmas: “I’m looking forward to spending time with my family over the holidays .We have Christmas Eve, Christmas Day and Boxing Day off. But part of me doesn’t want it to end. It’s such fun.”
Having worked in London, Mallorca, as a backing and recording vocalist on Britain’s Got Talent, Ellen Hasson is very much at home on the Derry stage. And we’re very happy to see her there.
Do you believe in Peter Pan and the fairies? I believe.
Peter Pan runs at Millennium Forum, Derry until 30th December. Make your Christmas magical with a Pantomime visit.