Earlier today I had the great pleasure of meeting local photographer Nicola Kelly from Moville. It was a coffee date, but one to discuss the life of like-minded creatives, and this lady is one very creative being, in more ways than one. It’s not just the camera that’s her specialty. It’s her character, her personality and her enthusiasm and passion for her work and family.
I’ve been following Nicola on social media for a number of years now and earlier this summer I watched as she flitted through my cousins wedding, photographing the special day. I was intrigued how she was able to carry out her work and yet not really be there at all. She was everywhere and yet she just seemed to float through the day. The photos she captured that day were spectacular. There’s definitely a little piece of magic attached to this young lady.
And so I just felt a real need to hear her story. Just how did she get into photography? Does she really enjoy her work as much as I felt she did? There was just something about her that I wanted to know more. And so a coffee date was had.
Mother of two little boys, and wife of one, she immediately comes across as a real family lady. And yet, there’s just so much more to her. As I certainly found out this morning.
We became engrossed in talking all things sons and mammy life. Having three sons (grown men) myself I could really relate to Nicola and her work/life balance and juggling. There was definitely a story here and boy did she blow me away.
Nicola told me she had initially embarked on an English degree at Ulster University in Coleraine as a teenager. I had also completed this same degree and so a talk about literature and Shakespeare followed. Nicola was inspired by Carndonagh Community School’s English teacher Mrs Mary O’Kane and remembers fondly her days of studying Macbeth with Mary. Again, I was also inspired by this same teacher and this same Shakespeare play (quite a few years before Nicola I might add!!)
Whilst in her final year at university Nicola became ill and had to leave her degree course. Following this departure Nicola fell into a lull, and took time out from studying and lost her mojo so to speak. As many do, there was nothing abnormal about this. However Nicola said she found herself in a place where she lost interest in furthering herself and became distant from her dreams.
Alas, a young man came into her life and changed all that. That young man is now her husband of 7 years, and at that time of his arrival into her life, Nicola began living again. She says Cathal Kelly helped her regain her confidence and helped her become whole again.

The young couple decided to move away from Moville and found themselves in Canada, touring and enjoying life together. Whilst there, Nicola fell pregnant with her first son, Caiden. She decided that she wanted to be near her parents and her home for the onset of parenthood, and so they returned to Moville. When her son was born, and mothering life took over, Nicola decided to do something for herself and have that all important ‘me time’. She embarked on a short photography course in Greencastle with local photographer Sean Arrow. She says Sean inspired her so much and he has had so much input into her becoming the photographer she is today.
Nicola told me that her mother was a keen photographer when she and her sisters were growing up,  so photography was always part of her life. But she didn’t quite know then just how big a part of her life it was to become.
On her wedding day to Cathal, he bought her, her first dslr camera as a wedding present. And this lady hasn’t looked back since. She began assisting Arrow with weddings and one day he trusted Nicola to shoot a wedding for him by herself. She says her nerves were wrecked that day, but the buzz she got soon allowed those nerves to disappear.
She then embarked upon a longer course at Rossan college in Letterkenny and the rest really is history. When pregnant with her second son, Harry, her sister-in-law asked her to shoot her wedding. Nicola said she really didn’t feel confident doing such but when Harry was just a few months old, she did just this, and so her wedding photography career really was born.
Nicola describes herself as ‘loving who I am when shooting a wedding. I like how I feel when doing this work and it’s just an identity I didn’t want to lose.’ Photography gives this young lady a freedom 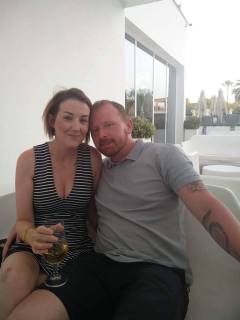 and a reason to work. Although first and foremost a mother and wife (she continually talks about her children and her husband), this work is something which allows her to be ‘her’. As a working creative myself I totally get this. It’s so important to find that niche in life and to be ‘ourselves’. Being a photographer allows Nicola to be ‘her’ and she glows when talking about it.
What I loved most about my talk with this young photographer was how much of a family lady she also is. She talks about Cathal as the ‘real love of her life’. She just lights up every time she mentions his name. She talks about Caiden and Harry like they are the most precious things in this world – which they are to her.
Her journey in life like everyone, has not been straightforward. She’s taken many a bend but she’s found her pathway with her camera, and she travels it so well. Now shooting approximately 40 weddings a year, she never bores of it.
Nicola Kelly is a hugely inspirational young lady. She’s someone who followed a dream, took baby steps and eventually became a very independent, very confident, competent and a very contented wife, mother and photographer. She shows that our pathways in life are never really clear cut. We can change direction and we can change our lives. She did. And she did it well.
Nicola Kelly Photography can be found at Nicola Kelly Photography Have a wee nose at her work. You really won’t be disappointed.