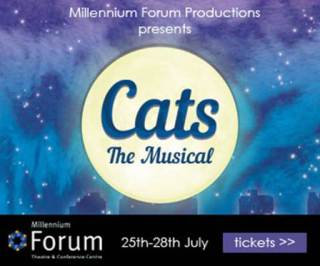 I for one am very looking forward to next week’s production of Cats. Having delivered a number of workshops on TS Eliot’s Cats poetry just two weeks ago during Interact Festival, I’m very looking forward to seeing this work unfold on the Derry stage. I was very hesitant about the poetry of Eliot prior to these workshops and Interact allowed me to find my inner love for the difficult poet. So I will be eagerly sitting on opening night next Wednesday with intrigue and apprehension. What will it bring me, only time will tell.
Press Release:
Rehearsals are well under way at the Millennium Forum for the annual Youth Productions musical of Cats which opens at the North West’s premier venue on Wed 25th July and runs until Sat 28th July.  Featuring a cast of the best in young local talent, this year’s production will showcase some of the stars of the future in this all singing, all dancing Andrew Lloyd Webber hit show.
This educational project which has been running for twelve years works with and develops local young people from all areas of the community throughout the North West to stage a major musical production.  Some of the participants in previous Youth Musical productions have gone on to successful careers in the Arts/Entertainment world including Mairead Carlin (Celtic Woman), Dylan Reid (Once The Musical) and Rachel O’Connor (The Voice UK/Lord of the Dance Dangerous Games).
Inspired by T. S. Eliot’s Old Possum’s Book of Practical Cats, this amazing spectacle unfolds in a larger- than-life junkyard playground and captivates audiences with feline favourites including Grizabella, Rum Tum Tugger, Mr. Mistoffelees, Macavity and Jennyanydots.
The Jellicle Cats come out to play on one extraordinary night of the year, at the Jellicle Ball. Individually, they recount their stories to entertain Old Deuteronomy, their sage and benevolent chief, who must ultimately elect one of the Cats to ascend to The Heaviside Layer and be restored into an entirely new Jellicle life.
Described by one critic as “a magnificent marriage of words, music, dancing, design and direction” Andrew Lloyd Webber’s Cats is a magical musical sure to mesmerise audiences, both young and old, who enter into the world of this fantastic feline fable.
Cats the Musical performs at the Millennium Forum from Wed 25th to Sat 28th July.   Tickets are now available from the Box Office.  Telephone 71 264455 or visit millenniumforum.co.uk for bookings.
Will I fall for the Cats, or will I run away? I can’t wait to find out. Rum Tum Tugger and Macavity, I can’t wait to see you and friends next week 🙂
GMcC