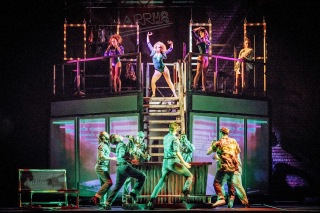 Did the eighties ever go away? I think not. Never have we forty-somethings (nearing 50 somethings), ever forgotten that iconic era. And now thanks to Flashdance, the eighties have returned with force. Hunt out those legwarmers, take this trip down memory lane and you’ll not only find the memories, but some really important life lessons as well.
FLASHDANCE-THE MUSICAL tells the inspiring and unforgettable story of 18 year old Alex, a welder by day and ‘flashdancer’ by night, who dreams of going to the prestigious Shipley Dance Academy and becoming a professional dancer. When a romance complicates her ambitions, she harnesses it to drive her dream. Based on the Paramount Pictures film (Screenplay by Tom Hedley and Joe Eszterhas, story by Tom Hedley) Flashdance is an inspiring musical about the power of holding onto your dreams and love against all the odds. Prepare to be blown away with an astonishing musical spectacle and phenomenal choreography to this iconic score including the smash hits Maniac, Manhunt, Gloria, I Love Rock & Roll and the sensational title track Flashdance – What a Feeling.
Last night as the curtain went up at approximately 8.10pm at Derry’s Millennium Forum, I was ready for the ensemble that followed. But I wasn’t quite ready to be blown away to the extent that I was. This was musical spectacle. And I loved it.
Alongside the main story there runs a couple of side-plots: one being, Alex’s’ best friend Gloria is drawn into a seedy world of lap dancing and drugs while her comedian boyfriend, Jimmy, is failing to make it big in New York.  This is a particularly good one as we all have that friend who goes off the rails. We all have that one friend who needs saving. Sometimes it might even be ourselves, but I really like this side-line as it’s very much part of life. 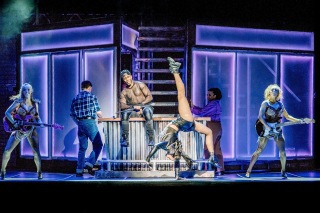 I’ve read in other reviews of this show that ‘no-one is really there for the plot’.  I beg to differ. People are certainly coming to hear this classic music and see these classic dances, but the plot is there too and it’s that very plot that draws me again and again to this story. As a firm believer in going after ones dreams, in standing up for oneself, in believing in oneself, this plot is worth noting.
Joanne Clifton, as Alex Owens was simply superb last night. Her dancing and vocal ability leave her perfect for this role and she owned that Derry stage.  Ben Adams as Nick Hurley, whom I was very fortunate to speak to just a few weeks ago, was simply incredible.  His outstanding vocals provided an A1 performance last night. The onstage chemistry between these two is clear. As a duet they really are a force to be reckoned with. And huge respect to Ben for those dance moves at the end. 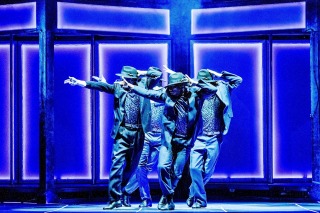 When these two sing together it really is something special. ‘Hang On’ and ‘Here and Now’ just blew us away last night. This is one musical duet that was born to be. The continuous standing ovation on opening night was so very deserved.
The entire dance ensemble last night was one that stood out. The cast was like a breath of fresh air among the chilly Derry air last night.  A very warm welcome to you all to the city. Have a great week here.

As my friend and I drove home last night we were still riveting in the Flashdance mode. We were making plans to attend dance lessons. We were singing unknown to ourselves. So surely this only serves to confirm that this really is a very much ‘feel good’ show and leaves you wanting more. Without hesitation, get down and see this show before the weekend is out. It’s a tonic in every such way. It’s even helped my flu this Tuesday morning. Flashdance, with those universal themes, those outstanding dance moves, those legwarmers and just those memories, really does have it all for a great night out.
Flashdance is an inspiring musical about the power of holding onto your dreams and love against all odds. It really doesn’t disappoint.
Flashdance runs at Derry’s Millennium Forum until Saturday 24th March. For tickets to to www.millenniumforum.co.uk or call the box office on 02871264455 now.
GMcC