It’s the seventeenth annual Christmas panto in Derry. It’s not only continuing the Millennium Forum’s tradition of producing outstanding quality and value-for-money entertainment for everyone this Christmas, it’s also creating a little piece of Christmas magic as well. That’s how I felt on leaving the theater earlier tonight.
Every year it just keeps on giving. Giving audiences a reason to celebrate, a reason to laugh. In the modern world, everyone needs a little laughter and this is definitely the show to make you laugh out loud this Christmas.

I laughed tears throughout the show. I laughed tears on the way home. And I laughed tears as I relayed the show to my family on my arrival home tonight. I’m still humming the ‘brown cow, white milk, green grass’ tune in my head!
Jack and the Beanstalk is a timeless classic and tonight showcased the talent that is in Derry this Christmas. And it’s that very talent that continues to bring people from far and wide each year to the Millennium Forum for the now infamous Christmas Panto.
Footloose opened the show. Immediately I was swaying, singing (not a note in my wee head) and tapping the floor. My little 6 year old cousin was staring at me with eyes wide open. Perhaps a little embarrassed by his big cuz, but I was in Panto mode, and even now late at night, I’m still in that mode.
Daisy the cow was superb tonight. She was and still is the best panto animal I’ve seen. How she manages to dance, and stay in rhythm is a credit to whomever is in there. Huge well done. We all love the cow.  Silly Billy (Conor O’Kane) was outstanding. One just wanted to take him home and wrap him up in cotton wool. I think everyone tonight fell in love with Billy. Jack (Jack McCann) and Jill (Sharon Duffy) really shone brightly on the Derry stage. The chemistry was there, and the fun made it the more appealing. It really was a delight seeing these three friends, Derry folk, together on the Derry stage once more. Even the King (Andrew Porter) was loved by all, despite his selfish nature at times! Were the harp and hen more important than Jill? But his fatherly love won in the end. They were all equally appealing from start to finish.
Flesh Creep (James Lecky) was despised by all (in a loving way of course) and sometimes the bad guy really does appeal!! Well to us good girls he does!! 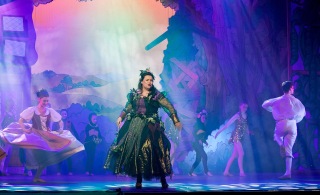 Orla Mullan as always did not disappoint. Well known on the local stage she just continues to grow in stature and performance. Her cover of Cindy Lauper’s ‘True Colours’ stole the show for me tonight. It brought me back to my teens and she blew me away yet again with that voice. Sheer brilliance.

But hell, what can one say about the never faltering William Caulfield. Now in his twelfth consecutive year of Derry panto, this man is simply a panto genius. I love him more each year, but tonight he went to a level of entertainment I didn’t think possible with panto. He just owns a stage and to see him hold in the laughter during ‘If I were not in Pantomime’ was just priceless. This panto song is the one to beat all others. There’s just no words for it: priceless.

Everyone on that stage tonight showcased what panto is all about. The Ensemble, the chorus, everyone excelled. The fun, the enjoyment, the theatrical craziness, the humour, the annotations, the sheer comedy that is panto. Not forgetting the superb stage setting and those costumes throughout the show. Fantastic at every turn.
For we young folk that grew up in the 80’s this is a panto to rock out to. A panto to hum along to. A panto where the best musical era is so well represented. From Footloose to Uptown Girl. AC/DC to Cindy Lauper. And of course Moana is there too for the contemporary kids. It really does have it all.

Panto is many people’s first experience of theater. My 6 year old cousin and his big brother, my 14 year old cousin, had never been in the Millennium Forum before tonight. Thanks to that production, they’ll certainly be making a return. What a great first show for them both in such a prominent theater. They were mesmerised at times, and at others they were wetting themselves with laughter.
To see my aunt laugh so much tonight was such a delight. She’d never been in the Millennium Forum before tonight either. But she, alongside those grandchildren (my cousins) will certainly be coming back again and again thanks to Dame Trot and gang. This doesn’t just allow folk to enjoy a night before Christmas. This introduces people to a tradition of fun entertainment and how wonderful that it allows us all to remember that there’s so much more to social engagement than screens. The stage is so very much more enjoyable.
It really is the music that makes a show for me. Tonight that music excelled. But the one song that blew us all away must surely be that Panto song to beat all others. Someone must surely record and see it go viral (please). ‘If I were not in Pantomime’ boasts a Childminder, a Baker, a Tennis player, a Ballet dancer, a Cleaner and a Painter. If it’s one piece of Panto you see this Christmas make it this one, if only for this one song. There’s no words to describe it. This is Panto at its very best. You really do just have to see this to believe it. Priceless it is in every way. Wear an extra pair of knickers, cos you’ll need them…I’m still laughing out loud and peeing my pants as I write and remember it. And I’m pretty certain that Caulfied was wetting his as he stood there innocent (NOT!)

I read earlier this week that this years Derry Panto is bigger and better than ever. That it certainly is. Christmas can be a very expensive time for many people, but this is money worth spending. You really do get your money’s worth and more.
Sponsored by The Richmond Centre, with director Jonathan Burgess. writer and producer David McLaughlin, choreographer Venessa Chapman and musical director Alan Wright, this is the panto that really does beat all others in 2017. To say it’s hilarious is an understatement. It’s brilliant. Just go see.