Skip to content
The Millennium Forum has been packed to capacity since last Thursday night for Irish Musical Dance sensation TitanicDance. And as I expected, it really didn’t disappoint. 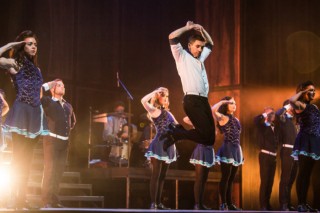 Step aboard one of the world’s most famous ships. Titanicdance tells a heart-gripping love story as the great ship makes its maiden voyage across the Atlantic. This epic tale is enacted by a cast of 24 of the world’s top Irish dancers and 6 of Ireland’s leading musicians, making Titanicdance an unmissable spectacular of live music, song, and dance, along with amazing costumes and set design. Visually, Titanicdance is something you’ll never have experienced before. The original choreography is sure to set your feet tapping and emotions running high as the story unfolds – you’re guaranteed to want more and more.
Having seen this show in February 2015 at Derry’s Millennium Forum I really was blown away. On that night I had my 70-year-old mother in tow – with her broken shoulder the show allowed her to forget her pain for all of two hours. She was captivated and I saw the tear run down her cheek more than once (it wasn’t from pain but sheer emotion from the show). Last night I was prepared to be blown away again. But I didn’t expect to sail the high seas of  emotion once more. I’d experienced that first time around. But that’s exactly what happened last night.  I laughed out loud, and I cried. Emotions ran high from beginning to end. This story is told with such compassion and yet so much energy that the emotion hits your right at the core. It tugs the heart strings like no show before. The story of the titanic was told passionately last night on that Derry stage. A story told through dance, music and song. And it was powerful.
An avid lover of Irish dance and music I spoke with Raymond Sweeney, Creative Director, Producer and Lead Dancer from TitanicDance, prior to the Derry show in 2015. Having danced and toured extensively for many years with Michael Flatley’s Lord of the Dance, this was Sweeney’s new show. Together with partner Louise Hayden (choreographer and dancer) and dancing peer, James Keegan, TitanicDance really was about to travel the world. And that they have done since that first meeting with Raymond.
Obviously I’m not biased that Raymond is a Donegal man! He really does stem from God’s country…the coolest place on the planet!
The tragedy of the Titanic has been told many times in various forms but before this show it had not been told through Irish music and dance. That’s just a snippet of why it’s so special. From the onset when I first saw it in 2015, the audience were mesmerized, as we were taken on the journey of all passengers who set sail on the maiden voyage of this now iconic ship. 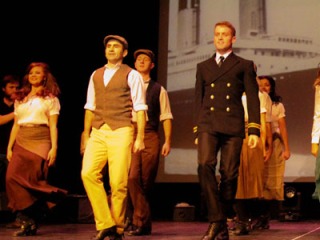 I spoke with James Keegan, choreographer and lead dancer in TitanicDance, in Derry a few weeks ago as they rehearsed prior to the UK tour. James, a native of Manchester but with roots very much in Leitrim, he told me about his part in the show and also in creating such, alongside Raymond Sweeney. As I watched Keegan rehearse that day, alongside Sweeney and Louise Hayden in the Millennium Forum, he told me: “TitanicDance is a journey. Like all journey’s it’s exciting. The show takes us on the journey of the Titanic through music and dance. But it also takes us, the cast and crew, on a journey worldwide. We get to showcase the show to audiences around the world. So it’s exciting in so many ways.”
I asked James what’s new since I last saw the show. He said: “This show really is so powerful and at such a professional level now. It’s the same show but the visuals are top notch. The technical and production end have developed so much from 2015. You’ll see a huge difference. In 2015 there was little on the set actually relating to the Titanic. Now we have a full set.”
Last night the audience really were taken through the story of the Titanic. We were taken on our journey of the Titanic. This incorporated an atmospheric dance below in the boiler room, a very live and kicking ceili below deck and so much more. There is of course the love story between a third class passenger (not DiCaprio and Winslet, but Raymond Sweeney and Katriona O’Donnel). This love story is expressed exquisitely and captured all of our hearts last night. It tugged at those heart strings at every turn.
Rebecca Winckworth showcased a passionate tone in the short interludes for the dancers. The band and the music had myself, my friend Louise and the entire audience on our feet, dancing, clapping and cheering. Her rendition of ‘The Parting Glass’ was exquisite. It was emotional, and it was so utterly poignant.
My favourite scene in this show has to be when the officers refuse to let Sweeney and his class through to escape. It’s danced so brilliantly and it hurts. It’s sad and yet it’s so powerful. It captures that experience perfectly. The choreography here, as in the entire show is sheer brilliance. 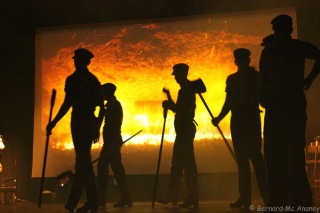 James Keegan had said a few weeks ago to me that the visuals are now much more powerful in the show. Boy is that an understatement. They’re brilliant. We, the audience really do feel that we’re aboard the ship. We’re sailing that sea and we feel the heat of those furnaces. TitanicDance allows us to be part of the journey from start to end.
To say the standing ovations last were deserved would be such an understatement. I knew this would be a good night, but I genuinely didn’t expect to be blown to such extremes and beyond once more. The Derry audience really did excel last night in their well-deserved appreciation of the show. And it was so lovely to see that utterly outstanding collaboration of musicians get that standing ovation also. Those guys are simply a very core part of this entire show. And being on the stage throughout just works.
It’s a long time since my hands hurt from clapping, but that they did last night. And it wasn’t just the standing ovations at the end. The shows invites the audience to be a part of it. The music just makes you want to clap. The dance just makes you want to clap. And you just clap! I felt like we really were part of the show.
I’ve been raving about TitanicDance since February 2015 to everyone who would listen. I’ve waited eagerly for last night’s show. And I now wait even more eagerly for the next chance I get to see this.
TitanicDance showcases a real story in our history. TitanicDance tells us the story like never before. TitanicDance allows us to experience many of the emotions that were experienced on that fateful night. And TitancicDanceshowcases more than any dance show I’ve ever seen, the importance of our traditional dance and music, and one of our most interesting historical events. An event we all think we know about, but one which we learn so much more about having seen this show.
TitanicDance sets sail for China in the coming days. It’s not its first visit there. And I’m pretty certain it won’t be its last visit there. I only hope last night isn’t its last visit to Derry either. I’m already eagerly awaiting its return.
We’re very fortunate to see some of the world’s greatest shows at Derry’s Millennium Forum. This is a show that originates from that very place, and here’s hoping it continues to return here again and again.
Riverdance certainly succeeded in making Irish dance contemporary in every way. TitanicDance is doing the same, and yet so much more…it’s teaching us and it’s showing us our history. And of course it really does have Donegal roots!! Need I say more.
GMcC