Nine Green Bottles is described by the author herself as: “reflections on the vagaries of life as expressed by a variety of modern day characters, such as Annie Nigma, a serious thinking person, and Dorg, an intellectual canine. It also presents some new views of old timers such as Jack Horner or Miss Muffet.” 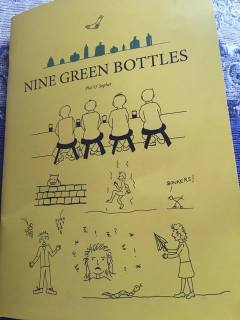 This really is a little treasure of modern twists on classic rhymes, anecdotes, illustrations and more. It will make you smile from start to finish.
Although I initially thought this might be a children’s book, I actually would tend to encourage teens to mature adults to pick it up and have a read. It will bring you right back to your childhood and yet allow you to remain smiling as an adult.
The book is a the first in a collection of two and can be purchased locally in Muff at Centra, Harkins, Maxol Spar and Borderland. Priced at just €3, it really is worth picking up and taking home for a read. You really won’t be disappointed.
My favourite piece in the book is one which all mothers will relate to. It’s titled ‘Single Socks’ and reads:
Who can solve the paradox
Of these things known as ‘pairs of socks’?
You purchase them in nice neat twos
To match with every pair of shoes.
People wear them there’s no quandary
Until the day you do the laundry.
Load them in the washing machine,
Soon they’ll all be nice and clean.
Hang them out upon the line,
They’ll soon be dry, and all is fine.
Spread them out upon the table,
Put them in pairs, if you are able.
Nine are grey, and five are blue,
And one’s an exotic purple hue,
This stripey sock was lost last year,
How did it turn up in here?
And there’s a sock you’ve never seen
In a shade of lurid emerald green.
On reflection, it’s clear of course,
Socks have a high rate of divorce.
A sock divorce researcher might
Try to establish if left or right
Is more likely to go astray
And cause confusion on washing day.

Author Sive Haughey lives in the village and is well known for her literary skills. This is her recent compilation and I’m already looking forward to book 2 in the series.