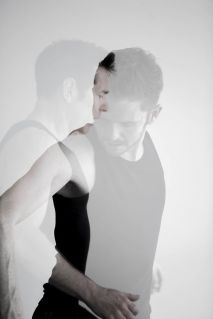 Saturday night normally means a trip to the local and home again. Nothing unusual or untoward on my average Saturday night. Last night was very much one with a difference. Theater is normally a week night visit for me, but this occasion allowed it to be a weekend one. Linger from Ériu, is the critically acclaimed contemporary Irish dance work from former principal of Riverdance, Breandán de Gallai. de Gallaí and Nick O’Connell, really did put Saturday night in Letterkenny into a whole new zone. One which had the audience entranced in their seats and taking in every breath from the two male dancers on stage.
I couldn’t take my eyes of the dancers for even a second. One just couldn’t miss a move, a step, even a breath. It was so captivating.  de Gallaí and O’Connell are two male dancers at opposite ends of their dancing careers and yet last night, they were very much two male dancers in their prime. This immersive work explored identity, sexuality and ageing, all unfolding through a rich tapestry of music, movement, live drawing, photograph and film. This offered a visceral aesthetic, the mercurial movements of youth juxtaposed with the more considered gestures of the less young. This performance made us all reflect on the passage of time and who we are at different stages during that passage.
de Gallaí told me a few weeks ago that this show, “is therapy. We both went through the same issues and in this we delve into a very hurt place to generate feelings and emotions. This theatrical piece tells the story of two men going on an odyssey.”

Last night everyone in the audience were on that odyssey. I alongside everyone else in the auditorium were reading experiences from our own lives as we watched this spectacle unfold. Emotions were high at every turn.
This was possibly the first time I’ve sat through a show in many years where one really could have heard a pin drop. Such was the focus of every audience member on the stage.
The themes of this show really are universal and everyone will take something different from it. We all try to be someone we’re not to please others at some time in life. With Linger we learn the importance of becoming our authentic self.
The dancing last night was something I’ve never seen before. It was such a mix and yet so utterly powerful psychologically. It’s an Irish dance at heart and yet so very contemporary. Musically there was jazz, classic, traditional to tango. It really did have it all. And yet the focus never left these two male bodies as they used the entirety of the Letterkenny stage. Every muscle, every ripple in their bodies was captured. The eye was never allowed to leave.
Last night I went on an emotional roller-coaster. There were so many sad times, but the overall message was hope. There will always be hope, but there really shouldn’t always be such sadness. Through dance, de Gallaí has introduced us to a little piece of him. To a little piece of identity history. To a little piece of what his world has been/is, like. Linger really is an exploration of themes one never expected to see through dance.
de Gallaí and O’Connell excelled on the stage last night. A very deserved standing ovation was awarded. This is theater at its best. This is Irish theater at its best.
Loved it from start to finish.