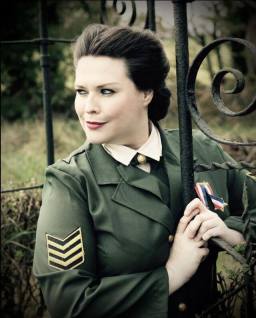 At Christmas she was making everyone’s dreams come true: most notably those of Cinderella, as The Fairy Godmother in this years Derry Pantomime. Then just last week she won the hearts of everyone at The Playhouse in Derry on Valentines night as Bette Midler. Earlier today I spoke with her as a Sweetheart of Swing. Of course it is non other than Derry’s very own Orla Mullan.
Orla and her comrades Kat Reagan and Naomi Rocke are The Sweethearts of Swing. Hugely inspired by The Andrews Sisters, these three ladies are transporting audiences back to the 40’s and a time of Victory Rolls, Seamed Stockings and Red lips. Not forgetting the delightful swing music, the fashion and the war.
The Sweethearts of Swing describe themselves as: We are a three part Andrews Sisters inspired girl group, singing all the favourites and more besides, in that fabulous flirty forties style. We are available to hire for birthdays, weddings, corporate events, or any evening where you want to slip on your jiving shoes. We are Belfast based, but we are always prepared to travel to support the troops!
I caught up with Orla Mullan earlier today to hear just how these ‘Sweethearts’ came to be.
“All three of us girls have worked together in professional acting roles over the years and we just got chatting one day last summer. We felt we weren’t using our voices to their full potential and that there was a gap in the market for this music.” 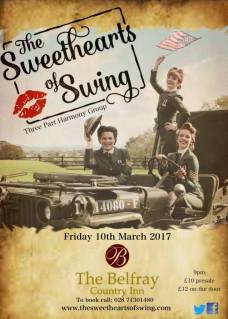 “Kat was always an Andrew’s Sisters fan and although we’re not solely focused on their music, they really are our inspiration. We were booked for a gig very early on in Derry and then had a Belfast launch last November. That launch was sold out and we were brilliantly received. It was bigger than we could ever have expected.”
So being the only Derry girl in the equation, a Derry launch was next on the agenda. The date is Friday March 10th and the venue is The Belfray Country Inn. This is sure to be a night to take a trip down memory lane for some, and a real treat for those who might not be familiar with the music of the era. However Orla did tell me I might be surprised at how much of the music I will recognise. “People are always surprised at how much of the music they already know”, she assured me. Time will tell!
I asked Orla just why they are launching such an act now. In 2017 with so much contemporary music on the scene, how will ‘swing’ beckon people to come listen. “All age groups are coming to see us and booking us for various events. People are getting up and dancing to it as soon as we begin. It’s taking the older generation back in time and the younger audience is responding thanks to such shows as ‘Strictly Come Dancing’. Across the board, the reactions are just brilliant.” 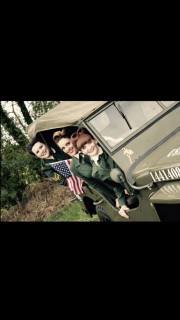 Orla is very definite when she says, “when music is that good, and written that well, you just can’t go wrong.”
So just what can we expect on March 10th at The Belfray Country Inn? “You will get the full show. This will be mostly music from the 40’s but we do delve into the 50’s and slightly to the 60’s too. You’ll be transported back in time. The 21st Century will be put on pause and you’ll go back to gentility and to a really special era. We will be in our war-time uniforms but you also get a sneak at the style of the time. There’s a real Romance to it all and it really is a fabulous night.” Orla has me convinced. I’m going. She sums it up beautifully when she assures me that, “It really is a feel good evening.” I can live with that. ‘Feel Good’ I shall on March 10th. Why not come along too. Like me, you just might surprise yourself.