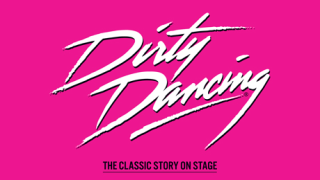 It’s now 30 years since the release of one of the all time greatest romantic drama films. I remember it well and it was the year that I, like many of my peers, fell in love with Patrick Swayze, and the year we all wanted to be ‘Baby’, Jennifer Grey. Dirty Dancing was born.
It wasn’t until the summer of 1988 that I fell for this movie hook, line and sinker! I was a student working in London and the movie had just come out on video (yes, the good old chunky video tape). I had met a friend that summer in London, Anne Marie McKenna, from Monaghan. I don’t think either of us could count the amount of times we sat (with wine) and watched Dirty Dancing over that three month period. We had all the dance moves, we had all the lyrics, and we had all the dialogue – most notably, “No one puts Baby in a corner”.
From ‘She’s like the wind’ to ‘(I’ve had) The Time of my Life’, this movie had the ultimate in music.
But this movie had even more. I often dwell on the story behind this over these past years. Johnny (Swayze) was the ‘bad guy’. Or so it seemed to those who judged people by how they looked. Baby was the academic, the girl who would further herself in education and politics. But this educated girl saw the true Johnny. She saw the man behind the leather, behind the glasses: she saw into his soul. And she helped us see it too.
I met my husband when I was just 21. He had the long hair, the leather jacket, the motorbike. Everything a parent doesn’t want for their little girl, just out of college. But I saw past the leather, the bike. Like Baby, I saw what was on the inside (mind you I liked what was on the outside too, just as Baby did with Johnny). My now husband, wasn’t the most favourite of visitors in the beginning – how time changes all such immaterial judgments. Just as Johnny stood up for Baby, my husband (then boyfriend) stood up for me in a situation I’ll never forget.
And so Dirty Dancing means more to me than just the music, the attractive guy: I fell in love with the soul of Dirty Dancing. I fell in love with its heart. 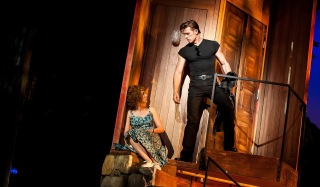 Earlier tonight I fell in love with the soul, the surface, the leather, the music, the dance, and all in between, as I watched it unfold on the Derry stage.
‘I carried  a watermelon’ is a legenderry line now. So funny, and yet so real.
The cast did Dirty Dancing proud tonight on the Derry stage.  Katie Hartland (Baby) stole the show for me. Her portrayal was outstanding from start to finish. She encompassed all that Frances ‘Baby’ Houseman was/is meant to be. She bore an uncanny resemblance to Grey which helped. Lewis Griffiths did take a while to grow on me, but grow he did. By 10.30pm I wanted to see more of him. Ok so I saw his bum, but I could have watched him on that stage for longer. Carlie Milner showcased the role of Penny Johnson to its full. Carlie never wavered in her role and she showed that we all make mistakes: it’s how we choose to fix those mistakes that count. No one has the right to judge another person.
Judgement is one of the main themes of Dirty Dancing for me. Jake Houseman judged Johnny. He judged him on his attire, his job, his very being. He also judged Robbie. Robbie was the educated, prosperous academic. The one Jake was quite happy to put his arm around. It took his daughter to teach him one of life’s most important lessons – never judge a book by its cover. We’re all to quick to judge another. We can all learn from Dirty Dancing.
Friendship is an attribute I’ve tried to instill in my children since their youth. We all need friends in life. Those we know we can depend upon. Johnny was such a friend to Penny. He didn’t judge her decisions, he supported her in every way a friend should. Another lesson learned.
But of course Dirty Dancing is about the ‘love story’. Finding someone we can believe in, trust and respect. Hell gals, we all want a Johnny. Some of us are fortunate to have found ours, others can learn from Baby and stand up for what you believe in. Stand up for your OWN opinion.
I guess that is how Dirty Dancing ends. Two young people stood up for what they believed in and found love. They showed the importance of self-belief, of self- worth.
The dancing tonight on the Derry stage was first class. My cousin who accompanied me said it was as good if not better than in the film. One can’t argue with that. The cast really did showcase ‘dirty dancing’ to the ultimate.
‘Nobody puts Baby in a corner’ will always be the ‘one-liner’ for myself. Johnny stood up for Frances: I hope you find that ‘one’ to stand up for you. I did.
As a musical this show isn’t the standard. There really is little live singing throughout. What live singing there is, is excellent. The voice of Daniela Pobega, Elizabeth, blew everyone away earlier in the Derry auditorium. Alongside Michael, Billy Kostecki, they really brought the show to a close in style.
Overall this stage show is not the film. There really is no replacing the original Dirty Dancing movie. Lewis Griffiths could never be Patrick Swayze. I didn’t want him to be. I think it’s important to go see this with a view to the story, to the lessons that are to be learned. And of course, the dancing.
The stage setting was very apt the whole way through and the river scene was done exceedingly well. The costumes were divine. I want that style! The show was fast, it moved along continually and for me, it worked.
I know that I, and my cousin, had ‘the time of our life tonight’. If you’re going along this week, you will too.
Dirty Dancing runs at The Millennium Forum until this coming Saturday night. If you’re an 80’s teenager, it really is one you don’t want to miss. And it’s guaranteed to stir up just a little (and more) memories from the infamous period. There’s just no escaping this era, and with musicals like this, why would one want to.