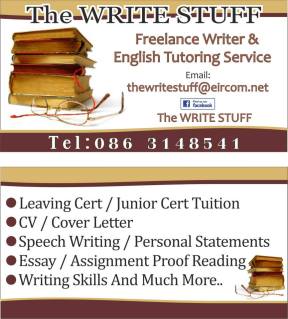 In January 2015 I took the plunge I’ve always dreamed of and set up my own business. Having been a full-time mother to three sons for 16 years I returned to full-time education in 2005. A BA degree and an MA degree in English/Irish literature followed. In 2010, having graduated with my MA I began tutoring a number of Leaving Cert students in English literature. I had a passion for all things Shakespeare and had found a profound love of Irish poetry and writings. These had always been there from sitting my own Leaving Certificate in 1988 but life took over, and my passion for such work was put on the back burner, so to speak. I never stopped reading or penning little pieces of poetry, ideas, dreams, but motherhood took precedence in 1991 and my life was filled with maternal love and dedication (the best mother I was not, but the best that I could be, I was).
By 1998 I was mother to three little boys and wife to one (not so little boy!!). I made the decision then to become a full-time mother (having worked as a secretary/book-keeper/childminder). And so my days were filled with cooking, cleaning, Mum’s taxi driving (oh it was endless) but I wouldn’t change one day of it. It was during these 16 years that I learned more about life, living, and loving than one could ever imagine. There were days I cried (oh I hated life), and there were days I laughed hard (I loved life). My life was real. It was far from perfect, but it was my life, and my boys were mine, and my husband was mine.
In the early noughties I knew it was time for more. I had always dreamed of studying English further, and in 2005  the opportunity presented itself. I returned to Ulster University and embarked on a part-time course in Irish Literature. It was then that I met my mentor in life, Dr Brigid Walsh O’Toole. Sadly Brigid passed away in 2011. But she left a legacy with me. A dream to be fulfilled. I had just finished my MA (with lots of help and support from Bid). The day she was buried I promised that I would make her proud. And I do believe that today I have. Bid (as I called Brigid) I don’t doubt is very proud of all that I am currently doing.
In 2010 I began tutoring Leaving Cert students in English. I instilled in them my love of Shakespeare and helped them understand their literature course of study. This was geared at family and friends’ children who were studying for the Leaving Cert. I also began penning some book reviews and a little cultural reviews for a London based Irish paper, The Irish World. I loved seeing my name in print. I wanted to see it more.
Then during 2014 I knew I wanted to take this a step further. I set about inquiring about setting up my own business and soon after my first inquiry I was on my way.

January 2015 saw the birth of The WRITE STUFF. Here I was penning music interviews with Irish Music Magazine and I was blogging at North West Culture Gal and Craic On Muff. I was also blogging with Mummy Pages and then with Ireland Today. I was tutoring Leaving Cert students all over Inishowen and was supporting students with their work at Ulster University. In May 2015 I realised that I would have very little work over the summer months. And so I came up with the idea of doing a Children’s Creative Writing Summer Camp here in my local village of Muff. I set about advertising such and within two weeks the camp was filled. This camp evolved out of my needing to create some summer work for myself. After one day that week in July 2015, it was less about work, and more about supporting local children in their love of writing and reading. I found a niche I wasn’t looking for, but one I fell in love with.
The week flew in and by Friday I knew that I had hit on something special. I had ten children asking me to continue with this group on a more regular basis. I agreed to think about this during that August and by September that year, The WRITE STUFF Kids Club was born.
We began a monthly workshop at Warrenview Manor in Muff and by that October we had also started in neighboring Buncrana. In January 2016 we set up in Derry and that summer we set up in Letterkenny. This wee club is continually growing.
To date there are groups in Muff, Buncrana, Derry, Letterkenny, Greencastle and it has even hosted workshops all over Co. Wexford.
As a Leaving Cert English tutor I discovered that 17 and 18 year olds had NO imagination. I could spend time encouraging them to understand Shakespeare, poetry, novels and other works of literature. And yet they were unable to start an essay question – “but how do we start the answer?” “I know the play but I just don’t know how to express myself?” were the questions these teens were asking.
The kids club is all about encouraging children to delve into their imagination, believe in their own opinions and beliefs and go with what they really think. I found that I was encouraging Leaving Cert students to think like children – to delve into their imagination and express their own individual thoughts and opinions. I began to see the rewards very soon. I began to realise that what was missing was simply, ‘imagination’. 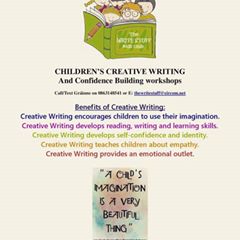 The WRITE STUFF Kids Club focuses primarily on creative writing – expressing ideas in language and words. Creating stories and poems and analyzing stories and books. But in reality it focuses on so much more. Children aged 5+ are learning to express how they think as individuals and put it down on paper (in words and in pictures) and they are exceeding all expectations. They are learning to believe in themselves and they are building their self-esteem and self-confidence. They are believing in themselves.
Earlier today a young man (12) Colm, from The WRITE STUFF Kids Club accompanied me to a production of Hamlet. It was his first Shakespeare play. Tonight his mother told me that the same young man now wants to read ALL of Shakespeare’s plays. I smile at the thought, and I also smile because I played a little part in his love of Shakespeare. This same boy will read all this work and more. And when he does his Leaving Cert I don’t doubt that he will excel…in every subject…because he believes in himself. 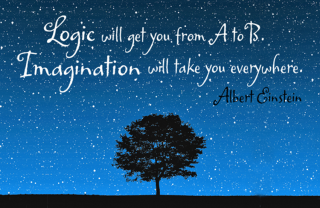 A couple of years ago I watched an amazing Ted Talk. That of Sir Ken Robinson Creativity Ken Robinson and I base all my work now on this. As Albert Einstein once said ‘Logic will take you from A to B: Imagination will take you everywhere.’ I firmly believe that Imagination is paramount in our children’s development and their future.
I can use my eldest son as testimony to this. Now aged 25 he works endlessly as an Agricultural Mechanic. Basically he fixes tractors (and other farm machinery for a living). This same boy excelled in school. He didn’t like school, but he had an amazing imagination. Aged just 5 he spent endless hours in our tiny front garden (a small patch of grass with a flower bed and some shrubs) working his farm and fixing his tractors. Neither myself or his father have any farming background. And yet this boy worked his farm daily on this tiny patch of grass. Now his dream has become a reality. Now his imagination has fulfilled that dream.