Skip to content
January 6th is a special day here in Ireland when we celebrate the women who worked so tirelessly during the holiday period. Nollaig na mBan – Little Christmas or the Feast of the Epiphany as it is more commonly known – marks the end of the 12 days of Christmas.
To celebrate Nollaig na mBan 2017 I am printing a wee Christmas story by Mollie McCauley from Drung, Inishowen, Co. Donegal which she wrote with The WRITE STUFF Kids Club just before Christmas. Mollie had the prompt, ‘It was Christmas Eve’. The following is her story. 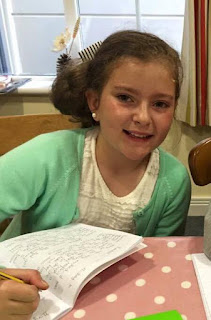 It was Christmas Eve night. Cassie-May went to Nannie Mary’s to deliver the presents to her cousins. They had done Secret Santa one week ago. It was a tradition that they were allowed to open one present on Christmas Eve. So they opened these presents from their Secret Santa. Cassie-May had got perfume, a purse and a hair-clip. Her Secret Santa was Mia Kate. Cassie-May was Mia Kates Secret Santa. She got Mia Kate perfume, a hat and a handbag.
The boys also opened their presents. My cousin had recorded the Late Late Toy Show so we watched it on the TV. We enjoyed watching the TV so then went into the room.
We lay on top of the bed. Then the wardrobe opened and all the books fell out of the wardrobe. We thought there was an elf in the wardrobe. Then we heard Santa’s bells ringing. Santa came into Nannies. We gave him some coke and biscuits. He gave us a present each and left.
We saw him in the sky when we were leaving. ‘Merry Christmas’ he shouted to us and he disappeared into the night sky.
By Mollie McCauley, aged 9
GMcC