As a teenager in the 1980’s I was a real rebellious one. I loved being opinionated and standing up for what I believed in. Maybe at times I went too far and drove my parents wild, but that was who I was at that time. I loved my rock music: mother didn’t, but heck I played it anyway! What can you not love about being rebellious? It’s powerful, it’s personal and it’s anti-rule! And I had an idol – Ren McCormack!

Footloose the musical has all of the rebellion I loved and more. As I sat in the Millennium Forum in Derry last night, all my teenage rebellious streaks came flooding back. And the memories were tenfold. This four-time Tony award-winning show had Derry singing, dancing and rocking in its seats. The musical was made all the more fascinating in that every cast member played an instrument.
Contagious songs like ‘Holding out for a Hero’, ‘Let’s Hear it for the Boy’ and the infamous Kenny Loggins anthem, ‘Footloose’ made this show a dream relived from my teenage years. 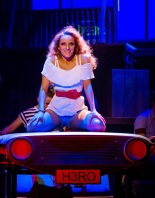 Luke Baker was Ren McCormack, the city kid who moves to Americas rural Bomont after his parents split up. His Dad walked out on he and his Mum, and Ren is left dealing with much more than the usual teenage angst. Baker was flawless in his performance and delivered with charisma and much sex appeal.
Hannah Price, playing Ariel, alongside her girlfriends, nail the characterisation of the 80’s girl gang and all that it entailed. The singing was again flawless and dancing only to be admired.

And of course it was wonderful to see our very own Marueen Nolan play Vi Moore. The Nolans are very much rooted in our home country and it’s always a delight to see one of the sisters on the Derry stage. Maureen clearly felt very much at home last night and it showed at the end of the show.
Alas, who can take it from Lee Brennan in his performance as Willard. The lovable, country bumpkin, Brennan stole the Derry hearts last night and took over the stage with his new found dancing confidence – and he did get the girl in the end. Willard we loved you!
On a more serious note I got a lot more from last night’s performance than just the fun memories, music and dance. The scene where Ren confronts Rev Moore about losing his son, about Ren’s Dad walking out, and about guilt, hurt, grief and all the other emotions, really made me stop and think. I realised that we all need to stop and reconsider sometimes. We have all lost someone, through death or separation. We have all dealt with emotions and we have all sometimes forgotten that there are other people to consider. Ren and Rev Shaw teach us so much in this confrontational scene and it’s one I overlooked as a teenager. Now as a mother, wife and grown up teenager (I wish!), life is all so very different from the one that my 18 year old eyes saw.

This show really is a classic. It’s timeless and it really did bring me down an eighties memory lane last night. I was dancing, I was singing and I was laughing a lot. Thanks Footloose for awakening the wonderful memories and for an absolutely great night’s entertainment. I left the show, like many others, feeling that I was now ready to change the world. Just as I was at 18!
Footloose the musical runs at Derry’s Millennium Forum until Saturday 4th June.
GMcC