London’s West End is coming to Derry once more. And this time it’s with Dean Elliott’s now infamous The Simon and Garfunkel Story. Direct from it’s success in London’s West End, a SOLD OUT UK tour and standing ovations at every performance, The Simon and Garfunkel Story is back! Using huge projection photos and original film footage, this 50th anniversary celebration also features full live band performing all hits including ‘Mrs Robinson’, ‘Cecilia’, ‘Bridge Over Troubled Water’, ‘Homeward Bound’ and many more. This production takes you back through the ‘Groovy’ times of the 60’s. It tells the story of both Paul Simon and Art Garfunkel from their humble beginnings as Rock n Roll duo ‘Tom and Jerry’, right through their massive success, dramatic break-up and finishing with a stunning recreation of the 1981 Central Park reformation concert. 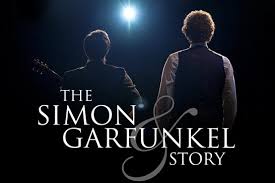 I was very fortunate to catch up earlier today with Dean Elliott, writer of the production. So just why did he put this together? “I’ve always been a huge fan and loved their music. No one has ever told their story in musical theatre before. It’s a fascinating story.”
Elliott rose to fame in the West End as the lead role in ‘Buddy – The Buddy Holly Story’. He says “I’m thrilled now to be able to perform the music of Simon and Garfunkel live on stage. My favourite part of the show has to be the 1981 Central Park concert. The performance just goes up a gear and I love it.”
Dean is no stranger to Derry and is yet again looking forward to his return next week. He told me, “I love it there. The Millennium Forum is a real shining beacon. I love performing there. This leg of the tour finishes in Derry and I’m looking forward to getting on the Derry stage next week.”
I don’t doubt that we are indeed in for a really special treat next Sunday night, May 29th at Derry’s Millennium Forum when ‘The Simon and Garfunkel Story’ takes us on the journey of Paul and Art. I know I’m certainly looking forward to the trip.
For further details and to book tickets go to Millennium Forum or call 02871264455.