Skip to content
Cultúrlann Uí Chanáin presented the inaugural Derry International Irish Music Festival just last week. Following the success of the Fleadh Cheoil in 2013 the seed was firmly planted and it reached fruition during the first week of February. The hard work paid off and the festival showcased contemporary Irish music at its best.

Throughout the week there were workshops, a trad trial, Residencies, courses, endless sessions and some very main events. There really was something for everyone. I was very fortunate to pay quite a few of these a visit. They each left a lasting impression and I’m already looking forward to next year’s festival.
The highlight for me just has to be The Transatlantic Sessions. This performance was the final night of the sessions UK tour and it was very poignant that it finished in Derry. Transatlantic Sessions is of course the brainchild of Aly Bain and Jerry Douglas. I had initially heard the sessions during 2013 and that night awakened my traditional musical spirit which had been dormant for too long. Since then I’ve listened to quite a lot of the sessions. I’ve had the great fortunte to interview a number of the musicians involved (including Aly Bain and Danny Thompson).

Joining the Sessions is Derry were Rhiannon Giddden, Karen Matheson, Cara Dillon and The Milk Carton Kids. Musicians included Phil Cunningham, John Doyle, Danny Thompson, Michael McGoldrick, Russ Barenberg, John McCusker, Donald Shaw and James Mackintosh. On Thursday night last week it really felt as if we, the audience, were invited into the parlour of a home and the session just flowed. Everyone was one on the night and the stage was just an extension of the said parlour. This was my first introduction to The Milk Carton Kids and they really added their authentic, exquisite twists to this session. Rhiannon Gidden was also a first for myself and she really stole the show. Her audacious reworking of ‘Black is the Colour‘ had everone in awe. As always Matheson and Dillon were warmly welcomed and delighted the audience to the core. Jerry Douglas didn’t leave the stage throughout. He really stood tall amongst his crew. 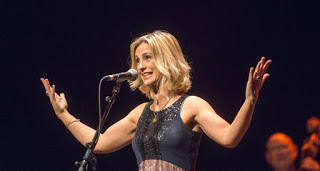 This combination of musicians excel when on that stage. It was a night of shared roots forging new common ground between today’s finest Celtic and American musicians. It was a night not only of music and song, but one of storytelling, history and sheer enjoyment.
The first  Derry International Irish Music Festival also showcased an exploration of the writings and ideals of the leaders of the Easter Rising 1916, in a concert programme inspired by their lives, their work, and their words.
The night saw Lorcán McMathúna and his band explore these writings and ideals of the Easter Rising leaders in a spectacular fashion. Musically and dramatically, through song and spoken word, this really was a little piece of history on The Glassworks stage in Derry.
There were numerous sessions throughout the week. Workshops were visited and explored by young and old alike.

The Instrument Fair gave people the opportunity to try an instrument and play their first notes. Professional instructors were present to demonstrate and assist. The Trad Trail encouraged folk to take their instrument across the city and play at various sessions. Bars and restaurants alike were alive with the sound of Irish music. Derry really was at the fore of traditional music and song for the week.
Last week not only saw the first International Irish Music Festival in Derry but it also saw the official opening of a very special music academy in the city. A legacy from 2013 had finally materialised. Acadamh Ceoil Chaoimhín Uí Dhorhartaigh opened it’s doors last autumn, with it’s officail opening during last weeks Festival.
I was very fortunate to meet up with Liz Doherty and Eiblín Ní Dhorhartaigh at Cultúrlann Uí Chanáin, Doire, late last year, to talk about this new academy and what it means for Derry. Eibhlín, the brainchild behind the academy, told me that as a legacy to the Fleady 2013, they decided to set up a Music Academy in the city. Liz told me that it would be ‘a centre of excellence for music. We intend to provide a host of musical programmes.’
Eibhlín said, ‘On a more personal level I have great pride in the opening of the academy because it is named after my husband who passed away 5 years ago. Chaoimhín would be very interested in passing on the tradition of music to young people.’ Chaoimhín helped form the first branch of Comhaltas Ceoltúóiri Éireann in Derry in 1972. He was instrumental with Eibhlín in the development of Cultúrlann Uí Chanáin which opened just weeks before his death.’ His fiddle was played for the first time since he died during the fiddle orchestra performance last week.
The fiddle orchestra performance was the closing concert of last weeks festival on the Sunday afternoon. 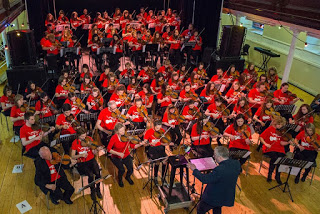 100 Fiddles at 55° North was a 20 minute musical piece written by Belfast composer Neil Martin. An orchestra featuring 100 fiddles from across Ireland and Scotland. This really was a musical spectacle to surpass all others. A very fitting end to an exceptionally fitting week.
Last week showed that Derry is very much at the cultural fore with Irish music. Irish music at its very best. Derry International Irish Music Festival patron Cara Dillon said that: ‘A festival of this kind has been long overdue in our corner of the world and I look forward to promoting it far and wide for years to come.’ I don’t doubt that her promotion will not be in vain. This is one annual event I will certainly be placing firmly in my diary for 2017 and for many years to come.
GMcC