I still can’t believe that it really is ‘that’ time of year again. My festive season kicked off in style earlier tonight as I arrived at Derry’s Millennium Forum for this years panto production. Aladdin, Widow Twankey, Princess Jasmine, Wishee Washee, The Genie and more were all there and larger than life on the Derry stage. 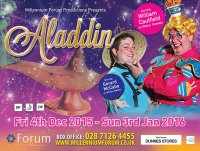 Tonight I was accompained by my cousin and her two children, aged 7 and 9. The little 7 year old had never been to a pantomime and was eagerly awaiting ‘curtain up’. She told me she had read the book so knew what to expect. Boy was she surprised throughout the night!
At approximately 7.30pm it was indeed time for ‘curtain up’. For the next three hours (including a 15 minute interval) it was laughs, claps and cheers from young and old.
I’m sure over 70% of the audience were indeed children but the inner child in every adult was very much present also (well it was in myself and my cousin!)

There was of course the base story of Aladdin but with so much more intertwined throughout the performance. I think seeing through a childs eyes is always best. Little Áine (7) was beside me. She laughed from start to finish and was mesmerised with Aladdin flying to Egypt. She just couldn’t understand how he could fly on the mat. To see her believe this magic and the lady in the box magic during the performance, was magical to me.
Gerard McCabe as always, excelled in his performance as Wishee Washee. One could clearly see how much he was enjoying being on stage equally as much as we were enjoying watching. Mikey Jay Heath as Aladdin gave an equally brilliant performance. On occasion he and Gerard just couldn’t help but laugh. Which of course added to our own laughter. And being easy on the eye always helps!!
Catriona McFeely portrayed the character of Princess Jasmine to perfection and her costumes were exquisite (I want that orange dress!). Keith Lynch (Abanazar), James Lecky (Emperor) and Gary Crossan (PC Pong) entertained in each role brilliantly. Of course the voice of The Genie (Ruairi McSorley) stole the show at times.
And on his 10th anniversary William Caulfield (Widow Twankey) was as ever a larger than life presence on the Derry stage. On donning the wig, dresses and make-up he really does take on a whole new life. And one we couldn’t possibly change if one wanted to. Mind you I did feel sorry for the lady whose handbag he went through…twankey heavens it wasn’t mine….he may have got a shock at the rubbish within!
Tonight I, alongside the Derry audience went to old Peking. We met the evil Abanazar who sought the magic lamp. We watched Aladdin save the day. But throughout it all we watched an amazing cast perform a wonderful Christmas panto. From the music of Ed Sheeran (Evergreen) to Kiss (Crazy Nights), this production had it all. There were kids jokes, there were adult jokes, there was something for everyone. And there was good old fashioned romance!
There was a perfect combination of fun amid wonderful singing and dance performances. The production showcased the abundance of talent that is in the city of Derry 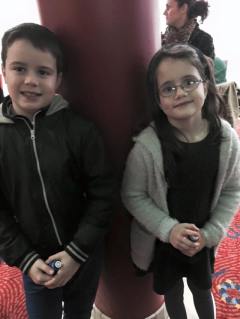 But surely the song of the night has got to be ‘The 12 Days of Christmas’. I’ll never listen to the popular tune in the same way again. There will now always be ‘6 boxer shorts, 5 Toilet Rolls, 4 pairs of trousers, 3 string vests, 2 football tops and a bra that could only hold 3’….there was of course snotty hankies, smelly socks and more but the first day of Christmas will forever be etched with ‘a bra that could only hold 3.’ The laughter tears really were running down my cheeks.
If this is what William Caulfield can give us on this his 10th anniversary I can’t wait to see what he gives us over the next 10 years! Earlier today Caulfield told me that he’ll be doing Panto until his health prevents such….I can’t imagine one without him in it now.
Tonight was summed up for me by the wonder in my little cousins eyes. She experienced real magic tonight. And because she experienced that magic, I did too.
The Derry panto, Aladdin runs at Derry’s Millennium Forum until January 3rd. Book your tickets now and don’t miss the show of the season. Call the Box Office on 71264455 or book online at www.millenniumforum.co.uk.