Last Saturday evening I was eagerly awaiting my prearranged meeting with Eric Bell at The Nerve Centre, Derry. Eric was in town to give a masterclass that very evening. As I had just finished my coffee in Café Nervosa, I was invited up to wait on Eric as he finished his sound-check. For just over half an hour I sat at the back of the intimate studio watching and listening to the legendary Eric Bell. I hadn’t planned on seeing him perform, so I sat there pinching myself that I really was in the vicinity of this legendary guitar player and actually listening and watching him play.
From the moment I walked into that room, this mans passion for his vocation was evident. I didn’t expect to witness such passion from this now 68 year old musician. Mind you he may be 68 in years, but he’s very much half that in his performance and his very presence.
When Eric finished his sound-check, he invited me to come along to the ‘green room’ for our chat. I was aware that his masterclass was starting in just one hours time and didn’t want to keep him, but that wasn’t a problem. Eric had all the time in the world and I felt like I was sitting catching up with an old friend.
I immediately asked Eric how he continues to have such passion for what he does after all these years. He told me, ‘I love it. It’s basically all I can do. I still get a buzz’. You can tell just how much he loves it in the way he talks about his playing.
So just who was the early influence on this East Belfast man, growing up? ‘The Shadows, Lonnie Donegan, The Beatles, The Stones. The first person that really influenced me was Lonnie Donegan. He’s one of the greatest singers I’ve ever heard in my life. He influenced everybody, Van Morrisson, John Lennon… When The Beatles came along, they brought with them so many chords that young guitar players didn’t know about. The Shadows brought new melodies so you had to listen to their records to hear this new playing. The Beatles were incredible songwriters, and again brought along more chords. So you had to learn more and more chords. Then The Stones came along and started bending strings on the guitar. I thought, jees, how’d you do that? So I went to a club one night in Belfast and I asked the guitar player how he did this. He explained that I had to buy a banjo string and replace the first string on the guitar with this, and then moved this to the second string and the second to the third and so on. So I learned to bend the strings in a different way.’ Eric is still in awe about his learning these new tricks with the guitar. As he says ‘we’re teasing with the strings!’
Eric told me then about how he moved to Scotland with a showband and played for a while there. On his return to Belfast he then played for another showband and moved to England. On his return to Belfast he then moved to Dublin where he heard Gary Moore play in a bar. It was there also that he heard a young Philip Lynott play. 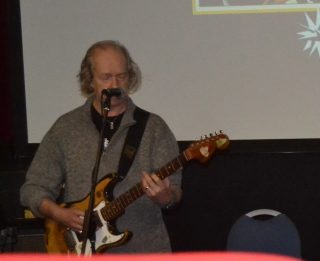 Bell says that it’s thanks to the Rolling Stones that aging guitarists/musicans can still go on stage and play. ‘It’s because of them that one can now go on stage at 70 and 75 and play without the audience shouting ‘sod off grandad. They’ve made it acceptable for me and others to continue playing.’
At 16 I was living at home and working a nine to five job. By night I would have this voice in my head telling me to practice my guitar. So I’d go up to my bedroom and play’.
Eric describes the modern day as a ‘sad era’ in relation to music. He talks fondly of the talent in movies like ‘Singing in the Rain’. ‘That’s talent’, he says, ‘it’s not aroung these days’.
Of course I had to ask Eric how important ‘Whiskey in the Jar’ is to him in  the modern day. He laughs saying, ‘its incredible as it’s helped to pay my rent for the past 40 years. It’s stood the test of time. For me, Philip and Brian, it was a love hate relationship with that song. This was recorded as a B side. Philip had the idea for the tempo and it took me forever. It was the hardest piece of music I’ve ever created, the intro to Whiskey in the Jar. I had no idea how to approach this song. It took me six weeks to put it together. I’d be humming ideas for this on buses, taxis etc. One day I was in a taxi, and it just hit me. I had to keep humming it, got out of the taxi, ran upstairs and still singing, I got my guitar and put it together. That was it.’
I asked Eric if he has achieved everything he set out to achieve. ‘No, I want to be a better guitar player, a better singer. I just love creating music. It’s a very iffy thing. As long as my health is ok, I’ll keep going’.
Eric confided in me one of his most helpful hints. He explains that many musicians develop arthritis. He recalls one night seeing Rory Gallagher warming his hands up prior to going on stage. He now does that on a regualar basis and firmly believes that it has helped mantain his ability to play for so long. ‘It makes perfect sense’, says Eric. 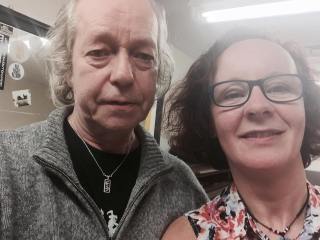 I couldn’t possibly leave this man without asking just how he and Phil Lynott came to meet. He happily tells me about the night he went to a club in Dublin. ‘I knew the owner so he let me in for free. I was saving money. This band called Orphanage came out on stage. Philip was the singer. Brian Downey was the drummer. Brian just blew me away with his drumming. I got an opportunity to talk to Philip and Brian. I asked them where the best place would be for me to meet group musicians. The Zodiac they said…which is where Philips’ statue now stands! Philip asked Brian if he’d like to take me on board. That night Thin Lizzy was formed.’
Eric Bell left home at just 16 and a half years of age. I for one, am grateful that he has now returned to his homeland and is set to continue playing for many years to come. ‘I’ve no idea what people get from my music. I just hope they enjoy it.’ Eric Bell is humble to the end.
Eric and his family now reside in Co. Down and it looks like he is finally putting down some roots. As he says ‘it’s in the sticks, but I love it’.
This is one meeting I won’t forget in a hurry. Eric Bell you rocked 🙂