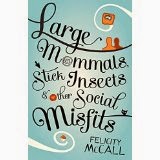 I first met Aimée McCourt Logan a few years ago when she was introduced as the protagonist in Felicity McCall’s first teenage novel, Large Mammals, Stick Insects and Other Social Misfits. National Lottery Award winning author Felicity McCall launched her debut teenage novel back in 2012. I recall recommending the said book to mothers of teenage daughters as well as those teenage daughters themselves. For the daughter this proved a fun, engaging read; for the mothers it provided a real insight into the workings of the teenage mind, tantrums and daily ordeals of teenage life.
Now in Infectious Monogamy, Boy Detox and other EXAM MELTDOWNS, Aimee McCourt Logan embarks on another stage in her life. She is gearing towards her exams, preparing for Derry’s equivalent of X-Factor, and having the usual teenage angst that is rife in these troubled years!
‘A new year has dawned at 1A Riverview, and for Aimée McCourt Logan (AKA your narrator) reality is encroaching in the form of GCSEs, job applications, and, it seems, an unprecedented outbreak of committed monogamy – usually involving unsuitable and possibly illegal males. A boy detox may be the only alternative. Austerity measures are threatening the life-enhancing link between her school, Castle Grove, and the Knockgore with Foxrock, home of her Twin Caoimhe (and her love god brother Darren.) Add to this a feminist mammy considering cosmetic surgery, a lonesome da 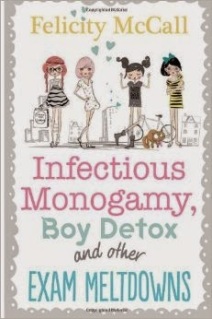 threatening to ruin the family’s reputation, a gran hell-bent on getting a criminal record, a disappearing cat, and it’s clear that her 17th year is going to be a challenge. Then Aimée and her friends suddenly find themselves poised for international stardom – or are they?’
So what does the most recent teenage fiction by McCall give us? It gives us a fun, entertaining read. As a mother of sons, it allowed me to laugh when I recall some of the teenage girls the boys brought home in recent years. I wondered if many of their minds worked alongside Aimée’s. I don’t doubt that they most definitely did! It gives a modern insight into the workings of the teenage mind. The social networking world is at the core of the interaction. The teenage angst is rife and the insecurities felt by us all at one stage is there to be understood.
As a reader, one really is transported back to the teenage years and the mixed emotions that were prevalent. As a mature adult (in age only I might add!) I can smile at it all now, but when you’re going through this stage in life, it’s no laughing matter. McCall allows her readers a story about modern teenage life, but she is again providing an understanding of that life and what it entails.
This is a universal theme and although the novel is very much rooted in place, it will appeal to mothers and daughters everywhere. Adolescence is a period of disorientation and discovery.  This transitional period brings up issues of independence and self-identity. Peer groups, romantic interests and external appearance increases in importances during the tween journey towards adulthood. McCall covers them all
Once again, I would highly recommend this read to not just the teenage girls themselves but the mothers who will learn even more from it.
Infectious Monogamy, Boy Detox and other EXAM MELTDOWNS can be purchased at www.amazon.com