I’m a regular visitor to the theatres in Donegal and Derry and am forever saying I must pay a visit to The Abbey in Dublin. As an avid literary enthusiast, freelance writer and English tutor, this is a visit I should have made years ago. But something always got in the way.
Not last night. As a tourist in the Fair City for the weekend I was adamant this would be the virgin visit to The Abbey, and it would also be the first of many. And that it most definitely was and will be. 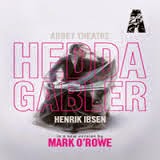 It was opening night of Mark O’Rowe’s new version of Henrik Ibsen’s Hedda Gabler. Just who is Hedda Gabler and what is she, I mused. As the drama unfolded on the stage I was soon to discover that Hedda was a troubled soul and simply didn’t know who she was. She is something to everyone around her but apparently she has no idea who she is to herself. On entering marriage because she clearly feels she may be left on the shelf, a whole new world awaited her. Or did it? She was bored, unamused, felt left out, and in many ways had a serious feeling of inadequacy.
In a world of convention and compromise, did she really have the courage to shape her own destiny? That is a matter for each individual to decide upon.
But either way I think every female can relate to a little piece of Hedda. She is an amalgamation of all of us – the good, the bad and the ugly.

Catherine Walker was outstanding in her role as Hedda last night. She never faltered. And she won our sympathy at every turn – she certainly won mine anyways!
So, was it worth the trip all the way down from Donegal to Dublin to visit The Abbey? It most certainly was, and on my regular visits from herein I think the said theatre and I shall become close
friends. A warm welcome awaited me on arrival, a delightful glass of wine was ready at the interval, and perhaps most striking was the feeling of being somewhere special for those few hours. That somewhere special is certainly going to become commonplace in my life and I look forward to many future visits.