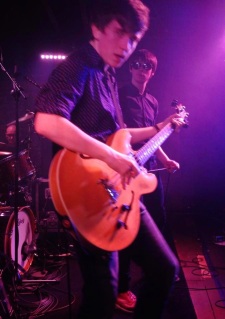 I was very fortunate to catch the four Cavan lads, aka The Strypes last Saturday night at McGrory’s Culdaff. This backroom has hosted many an up and coming band and last weekend was no exception. Already well established, these lads have headlined many a stage in recent years. And I was pretty impressed with what I saw last Saturday.

Ross Farrelly – Lead Vocals/Harmonica, Josh McClorey – Lead Guitar/Vocals, Pete O’Hanlon – Bass Guitar/Harmonica and Evan Walsh – Drums/Drums came across to me as a combination of ‘the Undertones meet the Rolling Stones’. This was punk/rock ‘n roll 2015. And these guys are still kids! Kids in the age sense of the word, but a far world from kids when it comes to performing on stage. I found each of them individually talented in their own right. Their ability to switch instruments mid song and drop not a note was pretty cool, even to an old doll like myself. I did think that my 17 year old son should be here and not me! But I’m pretty grateful that it was I in the Backroom that night!
The set was fast, it was furious, exciting and it was electric.

The Strypes had the Backroom on its feet throughout. There were young and old enjoying the music being pumped from that stage. I was intrigued with the over 40’s that were clearly rocking with the young ‘uns. There was some genuinely energetic moments in this set and it’s clear these lads love playing together. These guys can clearly get a crowd moving and keep them so. Will they be around to leave a legacy….time will tell. Something tells me they just might.
If their performance at McGrory’s is anything to go by, this young punk/rock band will be headlining every festival very soon.