As a child I recall hiding behind the cushion on my parents sofa and screaming when the film Dracula was on. I never watched it again for many years. As a mature student just a few years ago I studied Bram Stoker’s Dracula and fell in love with the story and Stoker’s masterpiece. 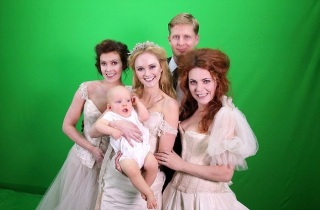 Tonight Dracula was taken to another level entirely. Jonathan Harker and Dracula was performed on the Derry stage at The Millennium Forum in Derry. Gerard McCarthy played both Jonathan Harker, whose diaries chronicle the vampire tale, and the greatest supernatural character of all time, Dracula.
With the use of multiple cameras, backing screens, projections and surround sound, this solo tour had the Derry audience on the edge of their seats.
The book was very much portrayed tonight and the screens allowed us to see the vastness of Dracula’s castle, the female vampires, and
the settings throughout the story.
Anyone not familiar with the story may have lost the plot at times but having studied this work in recent years I found it to be very true to the book and enthralling throughout.
McCarthy was brilliant with the accents and various character presentations, and never faltered. It was certainly very apt that this was in Derry so near Halloween. The Banks of the Foyle never fail to deliver at Halloween and this performance only added to the Halloween experience of 2014 in Derry.