As I walked along the Derry walls yesterday evening there was a real chill in the air. It was my first outing with the woolly tights and doctor marten boots since last winter. My favourite time of year is here and I was about to experience Autumn like never before. The orange street lamps along Magazine Street set the scene perfectly as I walked towards St. Augustine’s Church. 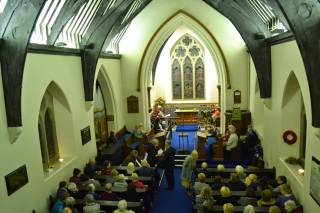 As I approached the church the tall trees awakened me to the genuine autumnal setting I was surrounded by. I noticed the gate was closed but then a gentleman arrived and opened it….I felt like royalty!
On entering the church one cannot but be amazed by the sheer brilliance in character that welcomes you. I ventured upstairs as I like to see everything that is happening! (some might call it nosey!)
Shortly after 8pm Autumn Leaves got underway. Autumn Leaves is part of the WOW (Woman of the World) festival 2014 and is an evening of spoken word, drama and music. As Ann Craig said in her introduction, ‘this evening will stretch Autumn to its limits’. The evening did just that!
Writers Anita Robinson and Mary Murphy left us all in laughter with their stories which had the genuine human touch! Like myself and many Mums Anita’s prose about the child going to university struck a chord: it was not only extremely funny, but so very true. Mary touched my heart as she read Post Script by Heaney. Jenni Doherty encapsulated Autumn with her poetic words. Her poem Village Buttons awakened a sense of nostalgia in us all.  Mairead Mullan and Jim Craig became characters perfected for a Autumnal night. Eamonn Friel sang poetic lyrics about the city and Ursula McHugh had the hairs on my neck standing to attention as she sang Autumn Leaves! Throughout the evening Deirdre Doherty not only accompanied Ursula but also played the keboard as readers read. Her music created a real ambience to the night. 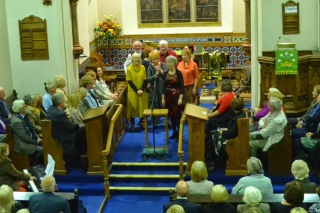 Autumn Leaves was a very special night to be a part of. It captured all that is autumn and allowed the spoken word, drama and song to fill the hearts of the autumnal audience. The appreciation of the night was evident on everyone’s face as they left St. Augustine s church.  As John Donne wrote; ‘No spring nor summer’s beauty hath such grace/As I have seen in one Autumnal face.’ I saw that grace in many Autumnal faces last night!

All proceeds from this event are donated to the upcoming Derry’Londonderry WOW festival (7-9 Nov 2014).