I have been very privileged over recent years to see many productions on the Derry and Donegal stage. Local writers are very much at the fore at present.
Last weekend showcased one of the finest pieces of local theatre in Derry in recent years. Namely, Josef Locke: A Grand Adventure. Written by Felicity McCall and directed and produced by Kieran Griffiths, this is a production which will surely tour.
The stage was The Playhouse, Derry and the audience was local and far afield!
Growing up as a teenager in the ’80’s I recall my parents going to hear Josef Locke. I recall them watching him on television. I was more interested in pop idol Nik Kershaw and Irish rock band U2! I didn’t pay much attention to Josef! 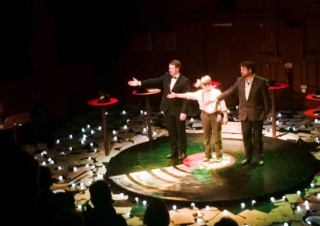 However when I heard during the summer of 2014 that Felicity had penned this piece of music theatre I knew that it would be something special. The final night of the show happened to coincide with my mothers birthday. What better gift to give her than her first visit to The Playhouse and a show I knew she would enjoy…as would I!
So on Saturday last, we headed to the Playhouse. And what a night we did have!
On entering the theatre our eyes were immediately drawn to the large vinyl record stage. It was very impressive. The play told the story of Josef Locke’s life, from childhood right through to his later years. Three actors were on stage, each representing a different era of Josef’s life. These persona’s interacted with each other throughout the show.
Ten year old Breen Doherty ‘Identity’ Josef was outstanding. Baritone Karl McGuckin excelled in his singing as the ‘alter ego’ Josef. Peter E. Davidson surpassed himself as the ‘reflective’ Josef!
McCalls script told the story of Josef’s life whilst the three men portrayed it.
My mother, who turned 69 that day is normally a quiet, reserved woman, was foot tapping, clapping and singing along. A number of times I had to tell her to ‘hush’ as she was retelling me what this song was about and what song should be next! I had to nudge her quite a few times!
However, she, like myself, relived the life of Josef Locke that night. It was simply amazing.
This show will hopefully go on tour later in the year so others can experience this excellent piece of music theatre. Derry, it’s writers, producers, it’s musicians and it’s actors have excelled once more!