Earlier this summer I heard that 2014 MTV Crashes was going to be held at Ebrington Square in Derry. Hooray I thought. This will be an amazing weekend and surely Coldplay, Snow Patrol and the likes will be coming to Derry. Alas I was rather disappointed when I heard the confirmed line-up. At 40+ I didn’t recognise ANY of the names. Oh dear! However as a ‘reviewer’ I was going to be there and judge for myself on the said weekend. During the build up to MTV Crashes I read many critical comments regarding the lack of real musicians coming to play MTV Crashes. I continually refrained from judgement until I saw for myself.
And boy did I see for myself. Unfortunately I came down with flu on the Friday morning and didn’t get the beginning of the night’s music. But after downing a lemsip at 7pm and putting on my thermals, I wandered over the Peace Bridge. Immediately I was mesmerised with all the young people walking alongside me on the bridge and their sheer excitement at the night ahead. Music was already underway and Neon Jungle were blasting from the stage. These kids were singing and cheering whilst en route to the gig. I walked along beside them smiling to myself. Oh to be so young and not feel the cold!! Here was I in my thermals, and these folk in their shorts and vest tops! The power of youth.
On my entry to Ebrington Square I was taken aback by the sheer atmosphere of elation amongst everyone. The crowd was definitely a young one, and everyone was just so happy and dancing along to the music. Food and drinks were being served on the perimeter of the square. A real buzz was felt at every corner!
By the time I caught up with the media gang it was time to go photograph Professor Green on stage. My son had told me I’d enjoy this set but having never heard of him, and seeing the average age of the crowd I doubted him. As I walked along the stage front and watched these young people await 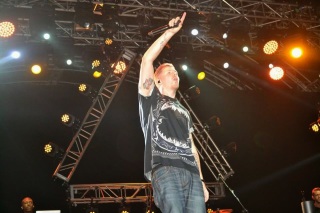 Professor Green I was memorised. These kids were super excited and ready for more. As Professor Green took to the Derry stage the audience went wild. In a very good way. Whilst trying to get some good photos of the act, I was continually turning to watch this young audience enjoy themselves to the limit. Professor Green had Derry in the palm of his hands. And he was quickly acquiring my attention and respect also. When he and Tori Kelly sang ‘Lullaby’ I was hooked! I became one of the kids in the audience.
Afrojack came on stage after Professor Green and again enticed the Derry audience into some kind of crazy frenzy. Again I was taken aback by the music and the sheer ability of this act to engage with the audience at every turn. People were high on 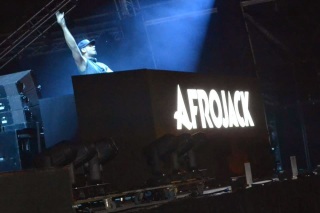 emotion and music.
As I left Ebringon that night, Afrojack was still on stage. I walked through the crowd towards the Peace Bridge and felt enormous pride in the city as this was shaping up to be not only a huge weekend but a huge success for Derry!

By Saturday I was feeling weaker with my flu and was very unsure if I’d make the Crashes on the night. But again, I downed my lemsip, put on the thermals, and off I headed to the Club night at MTV Crashes, Again I knew NONE of the acts, and didn’t expect to enjoy, but again I was surprised! This time I didn’t warm to the music, but I did to the acts. At all times the DJ’s never let the audience forget they were important. DJ Fresh, The MTV Club DJ’s, Sigma and Chase & Status had their Derry audience enjoying every minute. The crowd were going wild.

Again I left before the final play, and strolled through the crowd. Everyone was dancing to the music. Certainly there was a few intoxicated souls, but isn’t that to be expected. At no point did I witness any trouble or any sign of trouble.

Throughout the weekend there was numerous security staff and volunteers throughout Ebrington Square and its surrounds. There was always someone nearby if one needed assistance. Organisation was second to none.

I was very disappointed to read on a facebook page yesterday that there wasn’t even a ‘flyweight’ act playing over the weekend. I thought there was no one big playing either, but having been there and experienced if first hand, I saw just how amazing a weekend MTV Crashes was in Derry. I saw how our young people enjoyed each and every act that played. I saw that it’s possible to always reserve judgement until one sees for oneself exactly what’s on offer. And this past weekend I did just that. My final judgement must surely be that MTV Crashes 2014 was a huge success in every way. Derry City just continues to put itself on the world music map. And this past weekend has just made it’s place on that map a little bigger. Here’s to many such weekends in Derry!

(A selection of photographs from both Friday and Saturday night are available to view on North West Culture facebook page.)