DENIZEN by Dave Duggan was launched last Thursday night, May 29th, at the Central Library in Derry. ‘This verse drama is a courtroom drama, in which the last republican dissident challenges himself to build a future without violence. The drama is a ‘speech from the dock’. There is a chorus of guards and an audience of citizens.

There is a table of forensic evidence, which takes us through Denizen’s life and actions. The contest of civil and international conflict, as well as the arguments Denizen faces personally and publicly, underpins this literary and dramatic work.’ 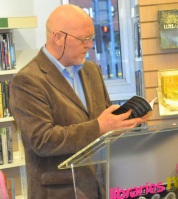 Speaking at the launch on Friday night Paul McFadden explained that this drama ‘deals with a subject which many of us would rather not explore. It is dramatic and it’s challenging. It’s disturbing and it’s
provocative. It does everything a graphic drama should do’.
‘In this verse drama, it is not just the protagonist who is challenged by the courtroom – we, the public are also challenged.’ McFadden is clearly very impressed with this latest work of Duggan’s and goes so far as to say that it is ‘Duggan’s most important work to date’.
DENIZEN is now available from all local bookshops and http://www.ghpress.com