No Frontiers Book club met this evening to discuss the Louise Doughty novel Apple Tree Yard. Described by the Richard and Judy Book Club as a ‘psychological thriller’, the local group had much to say and an interesting discussion followed!

Apple Tree Yard has been described as ‘brilliant and bruising’, ‘terrific’ and even ‘taut and psychologically persuasive’. However No Frontiers Book Club had their own opinions!

Yvonne Carmichael has a high-flying career, a beautiful home and a good marriage. But when she meets a stranger she is drawn into a passionate affair. Keeping the two halves of her life separate seems easy at first. But she can’t control what happens next!

No Frontiers had varied opinions on the work, but all agreed that is was certainly NO ‘psychological thriller’! At first it had the impression of a ‘chick flick’ but eventually more depth and structure set in. Yvonne had few sympathies from us and was even described as being mentally unstable. Some of the group felt she was not a fully developed character. Told in the first person narrative we are never given another perspective except that of Yvonne. So we must decide for ourselves if she’s believable or not. Her affair is very much unbelievable. She embarks on it in such a callous manner that even a mid life crisis does not justify it. Her new love Mark is not a rounded character and fails to gain empathy from any of the group. Yvonne is clearly very alone in her life and resorts to her computer as her only comfort. Her heart talks to the computer with her letters and even her best friend cannot be confided in. Some felt sorry for her husband but many of us blamed his affair with a younger woman for Yvonnes eventual bad decisions. However her affair showed that ‘two wrongs really don’t make a right’!

Yvonne narrates the entire story from the dock and we are anxiously waiting to get to the end. It is slow in places but in others it can be compelling. The story is addressed to her lover and much is through an inner monologue. She is not a rational human being and eventually becomes detached from any objective reality. 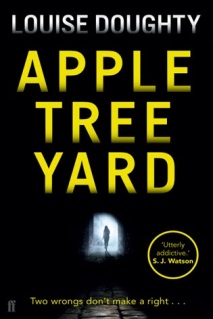 The rape scene is the book awoke many emotions in everyone. It showed the true horror of the crime and instilled a real feeling among each individual within the group. However her failure to tell her husband and confide instead in the unlovable Mark, leads to the rapists eventual murder. We all agreed that the murder was unnecessary and appeared to have happened just to help the storyline develop.

One cannot deny that this book is exceptionally well written. Doughty is certainly an excellent storyteller but she fails in creating a ‘psychological thriller’. This book has many positive attributes but these do not outweigh the failings. A number of us admitted to skim/speed reading many parts to get to the eventual outcome.

This admission lead to even more discussion. Others could not understand the ability to skim/speed read and found the idea impossible and unbelievable. But that is how the book gets you. It certainly allowed for much discussion, debate and definite entertainment among the group. The final outcome was that it was readable but not one we’d highly recommend. It even a few comparisons to ’50 Shades of Grey’!

If any of us ladies were contemplating an affair to spice up our lives, it was certainly knocked on the head tonight. Back alleyways, disabled toilets etc will not be featuring on our list of places to explore any time soon.

Here’s to reading Niamh Boyce’s ‘The Herbalist’ for next months meeting!