Skip to content
Square John and the ‘One in Six’ Theory is a  play  written by Vin McCullagh and directed by Carl Campbell. This story is set in a psychiatric hospital in N.Ireland. The eponymous Square John has been a patient there for over 40 years. John grew up with thirteen sisters and was the victim of merciless bullying from them as he was the only son and heir to the farm. John’s ‘theory’ explains this treatment of him as the result of his sisters’ ‘weemin’s troubles’ and how it led to him being placed in the hospital following a breakdown.
The play unfolds as John, now institutionalised and suffering from an extreme form of OCD based on numbers and patterns, formulates his ‘One in Six’ Theory. His Nurse and friend, Gerry McGann, has championed this theory despite the scepticism he encounters from his colleagues who wonder if perhaps McGann should be amongst the patients rather than staff – or is Nurse McGann’s campaign a clever smokescreen for some other crafty plot? One must decide oneself on seeing the play. I’m still considering McGann’s role!!

Karl McCarron is outstanding in his role as Square John. He is consistent in his acting and his excellent accent throughout. Square John shows how some people can be institutionalised for the wrong reason and live a life that could have been so very different. Square John became a victim of the system and is aware of this. His situation is by no means unique. Our surroundings really do play a huge part in who we are and who we become.
The acting and dialogue is farcical and humourous throughout. We really are left wondering who is craziest, the patients or the staff! The student nurse was spot on when he told his lecturer, ‘I’m not sure who’s madder, the patients or the staff’! But either way, it gives a clear insight into the daily life of both patients and staff in such an institution of the time.
McCarron’s portrayal of Square John shows how habits and routine become a necessity in existing, when institutionalised. He’s not mad, he’s simply a victim of his society.
The writer of this play, McCullagh, has a unique insight into mental illness. Having experience as both a patient and a nurse, he has the understandings of both sides. McCullagh puts all of his experience into this production. 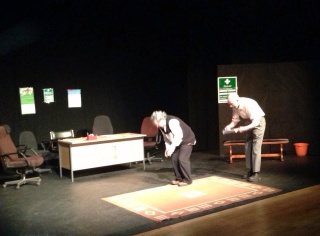 The audience I felt laughed more than was necessary during the performance, and at times there was definite humour but a real edge of seriousness preceded the humour! It gave a distinct glimpse into the corridors and rooms inhabited by staff, who maintained these regimes that dealt with many of society’s forgotten people.
These forgotten people are as real as you and me. Society has failed so many of them. The hidden world of the mental hospital is exposed with this production. And the failure to support these people also!
I spoke with a number of people during the interval of the play and each said that they all know someone who is just like one of these characters on stage. Such is the reality of this situation.
But everyone agreed that the pinnacle of the show was Vin McCullagh’s monologue at the end. Vin tells his own personal story and he does so with such passion and feeling that one can’t help but be moved. His words are from the heart.
We all know someone who has suffered or is suffering with a mental illness. Vins words quite simply blew me away. Surely I’m not the only one who left the theatre in tears. But hopefully everyone left with the message that the play and Vin were sending out. That ‘the stigma comes from the fear’. And it’s up to us to relay to the world that mental illness should not have such stigma attached. It’s not something to fear. It’s an illness like every other. And with the right help, it can be cured.
As for the ‘one in six’ theory, women can be offended or amused by it! Square John believes that one in every six women that you meet is going through pmt! The ‘TOM’ remedy might be worth a try every now and again!!! Who knows? I’ve heard our ‘monthly cycle’ called many a name, but now it’s got a new one!
Statistics show that 1 in 3 people will suffer a mental illness during their lifetime. It could be anyone of us next. So it’s certainly time that society changed its attitude to such and the so called ‘stigma’ is erased once and for all!