Tonight saw the Music City 2014 get underway in Derry. The ‘Hear the City Sing’ event went down a storm with the huge crowds that gathered in the city centre from early evening. Hosted by Edith Bowman from BBC Radio 1, this event showcased some amazing local talent and the infamous Shane Filan from Westlife! 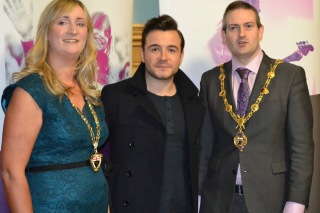 This was the city’s first Music Legacy event and was held at the Peace Garden/Foyle Street Car Park in the centre of Derry. Music was provided from The Clameens and Little Bear. Both groups excelled on
the Derry stage tonight. An outstanding performance from Erica Curran on the Guildhall balcony had the crowds full attention. The youth choir sung eloquently. The evening showed just what musical talent there really is in Derry. And there’s so much more to come! Shane Filan from Westlife saw adults, teens and children alike, screaming for ‘more’. A real ladies man, he entertained to the full.

Shane Filan complimented the Derry crowd but also the city’s hospitality. He thanked ‘The Custom House’ restaurant for an amazing steak earlier in the evening, and said the Northern Ireland audiences are among the best in the world. Need he say more!!

Mayor Cllr Martin Reilly said that this event is the city’s way of thanking all who participated in the monumental success of last year. This success is set to continue in Derry for many years to come. ‘Hear the city Sing’ provided Derry with the opportunity to showcase local talent alongside that of an internationally recognised performer in Shane Filan. The event combined music and visual art reaching out to a wide ranging audience within the city and its surrounds.

Yvette Mattern’s Global Rainbow illuminated the city from 9pm, beaming a spectrum of laser coloured lights across the banks of the Foyle. This will continue for five nights, creating a natural perspective arc of a 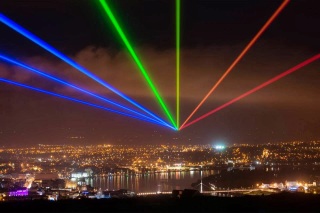 The evening ended with the showcasing of Mairead Carlin and Damian McGinty’s song ‘Let the River Flow’ accompanied with the video of highlights from last year. It was special in so many ways.

Tonight as with all the events from 2013 was organised to perfection. Derry City Council excelled throughout last year with the City of Culture status and this is continuing forward. Crowds are behaved to the highest standard and facilities are second to none. Credit is certainly due to these people.

Edith Bowman summed the occasion up perfectly when she said ‘the atmosphere is surging for the past year and it is continuing’. How true her words are. To the Derry people she said ‘You are one special bunch of people’. Who can argue with that.
Here’s to yet another amazing year in Derry and many more following!