Skip to content
Muff’s Luke McLaughlin is part of an up and coming Brit Pop/Mod band based in London. Luke hails from Wheatfield Muff and is currently based with the group in London. The Turning consist of Luke McLaughlin (Vocals/Rhythm Guitar), David Bardon (Lead Guitar), Louis Gilbert (Bass), Ruben Kenton-Harris (Drums) and are heavily influenced by bands from all decades such as The Beatles, The Kinks, The Doors, The Jam, The Who, Oasis and many more. 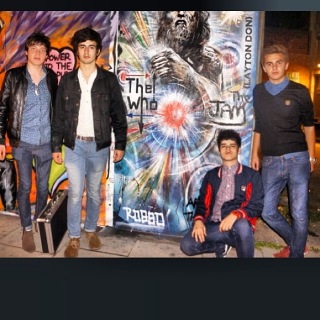 This young group have only been together since earlier this year. Shortly after meeting they wrote ‘Magazine Street’ which features in their self-titled debut EP. This debut EP consists of four songs and each one very individual. ‘Stand Clear of My Mind’, ‘What You think is Right’, ‘Magazine Street’ and ‘The Painful Art of Dreaming’ are four authentic and very energetic, melodic and ending with acoustic, tunes. Each one is different from the next but all equally amazing.
The boys played in Derry at the end of the summer and will hopefully be returning again soon. At present they are gigging all over the UK with many bookings in the capital, London.
There are many young bands trying to make it in the music world today. Some will succeed but most won’t get there. The Turning is one dedicated group of young men who will be a household name in the next few years. They’re passionate and obviously exceptionally talented. As Gigslutz Uk said of them, ‘They can only get bigger from here. Taking it in their stride, this is The Turning‘. And bigger they will get.
You can download ‘The Turning – EP’ from itunes.