Most of us who studied Irish at school in the 80’s will surely recall the novel Caisleáin Óir! I firmly remember reading a passage for my Irish oral examination and answering questions on the novel after reading the requested section. Thankfully I managed OK  – I think! So I’m really looking forward to seeing this musical on stage next week.

Thirteen years after its first performance at An Grianán, Caisleáin Óir returns. It opens on 12th November. This famous tale of Irish emigration is An Grianán’s main contribution for The Gathering 2013 . 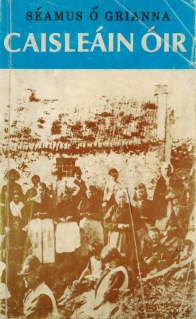 Based on Donegal author Seamus O’Grianna’s well known novel, this large scale musical adaptation features a cast of 60 performers. At the centre of Caisleáin Óir (‘golden castles’) is the love story of childhood sweethearts Séimí Gallagher and Babaí Mháirtín Friel and what happens to them when poverty forces Séimi to emigrate to America. Through music, dance and song, we see the life of Donegal people at the end of the 19th and early 20th century.
Hardship, eviction and emigration contrast with joyous moments of playing on the beach, fair days, dances, cards and céilís. This is a story of childhood romance and the pursuit of destiny during times of such hardship!