Skip to content
Saturday night, 27th October 2013, saw the JammHouse at Derry’s playhouse jamm like never before! Roy Arbuckle was centre stage and his music from the past 30 years was delivered to a very appreciative Derry audience.
People will remember Roy from his early days with showbands and in the 70′s with folk band Chaff. He moved to North America in 1978 and toured extensively with Fiddlers Elbow and later The Rambling Boys of Pleasure. 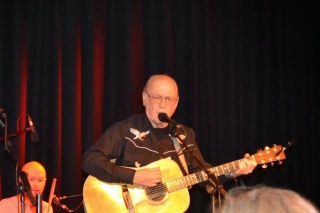 But on this occasion Roy was on his home turf and never faltered! He was joined on stage by a number of outstanding musicians and singers including Philip Wallace, Johnny Nutt, Pete O’Hanlon, Anne Tracey, Ursula McHugh, Different Drums of Ireland, The Henry Girls, Tom Newman, Paul French, Paddy Nash, Diane Greer and anyone else I’ve left out! His son also joined him to sing a song about his great grandmother. Very touching at all times.
The night was a celebration of Roy’s songwriting and music. In many ways it was a trip along the road of Roy’s life. He told stories about his travels, his family and his love for his wife and children. Roy excelled in every way on the stage last night.
It was very fitting that on leaving the Play House a selection of drums, fire fun and dancers were on the Derry walls. A memorable night both inside and out!
Roy Arbuckle will no doubt be entertaining audiences for many years to come. But this night was not only intimate and emotional, it was a home celebration and it was an honour to have been part of it. And I’m sure that all in attendance would agree. Keep jamming Roy!